The highly anticipated debut of Political Animals is almost here. USA’s limited television event features a talented cast led by the one and only Sigourney Weaver. Below, check out an exclusive clip from the drama’s premiere episode! 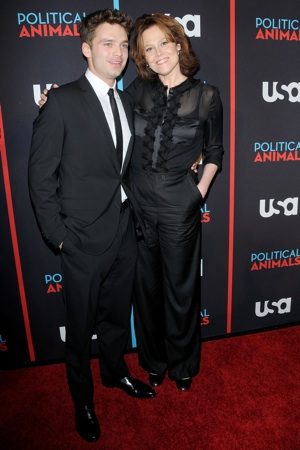 Sigourney Weaver is heading to television. The Oscar-nominated actress is bringing her talents to the USA Network. This summer, Weaver will headline the new drama Political Animals, which focuses on a family deeply embedded in — you guessed it — politics.

In the series, Weaver stars as Elaine Barrish Hammond. She’s a former First Lady and presidential candidate turned Secretary of State. Weaver’s character makes it a point to stay calm while in the Oval Office but her demanding family constantly pushes her limits.

The Hammond brood consists of philanderer and former U.S. President, Bud (Ciaran Hinds) and twin sons Douglas (James Wolk) and Thomas aka T.J. (Sebastian Stan). They may share a birthday but the 30-year-old brothers are nothing alike. Douglas is clean-cut, career oriented and currently serves as his mother’s Chief of Staff.

Sigourney Weaver is such a Political Animal >>

On the other hand, T.J. is more of a wild card. Life for the Hammonds hasn’t been easy, and no one knows that more than him. He was harassed for being the first openly gay son of a U.S. president and has spent much of his life struggling with addiction.

Check out an exclusive clip from Political Animals that features Elaine and T.J. in action.

Will you be tuning in to this fictional First Family?