Salma Hayek was on a mission when designing the look of her Savages character. Not only did she draw inspiration from the deceased, the actress made sure she was Halloween imitation ready! 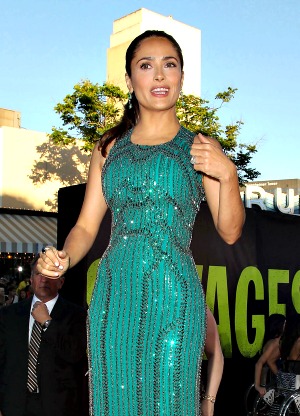 Salma Hayek had a very specific style in mind for her Savages character Elena. The actress, insistent on bringing her vision to the big screen, explains why bangs and one specific necklace were a must!

In order to make sure you’ll never forget Salma Hayek‘s role as leader of a Mexican cartel, the 45-year-old set about creating a very particular look for “La Reina,” based on a figure from her own real-life past.

“There was somebody that I got to be friends with, who was a very, very, very strong, very powerful woman in Mexico. She has passed away now,” the Mexican born actress explained to reporters.

Staying true to the inspiration meant electing to have Elena appear with the same hairstyle and large diamond necklace in every single scene — a choice director Oliver Stone couldn’t wrap his head around at first.

“I tried to explain to him that these women know they are going to be an icon and they create a character,” Salma Hayek elaborated. “These women design themselves. They don’t want to be versatile. They want you to always remember them.”

Continuing to explain the instantly recognizable look, she added, “I said, ‘OK, I have to design her in such a way that somebody could dress up as her for Halloween. It had to be so identifiable that you could actually impersonate her.”

Hopefully one moment holiday revelers will pass on impersonating is the slap Salma Hayek deals costar Benicio Del Toro — a slap that took many, many takes to capture!

“You know, it’s funny, I slapped him a lot,” Salma Hayek admitted. “It was the strangest thing because I was nervous, but Benicio was like, ‘Hit me! Hit me! Come on, do it harder!'”

“The strangest thing was that, with every other scene, Oliver wouldn’t let me do again. I did one take, which was very frustrating,” she says. “But this scene where I slapped Benicio, we did it 20 times.”

Will you be dressing up as Salma Hayek’s sexy Savages character this Halloween?