There has been quite a resurgence of thrillers written by women as of late. Each month, Jenn Lawrence will spotlight those can’t-miss thrillers. 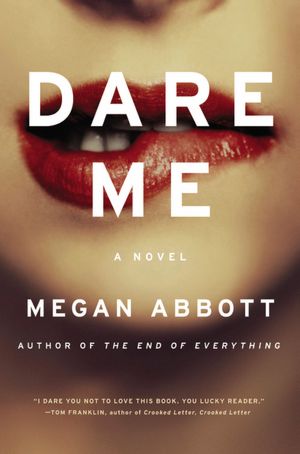 Dare Me
by Megan Abbot

Addy Hanlon and Beth Cassidy have been best friends since they were young. Beth was always the dominant one in the friendship, and Addy went along with everything she suggested. That continued into high school — now both girls are seniors and the head of their highly-competitive cheer squad. The other girls in the squad fear them as much as they look up to them. Everything changes when a new coach arrives. Most of the girls, including Addy, are swept up in Coach French’s rule while Beth sits out on the sidelines, vowing to win back the adoration of the girls as well as her best friend. When a suicide occurs, Coach French and her squad are immediately put under investigation. It is Addy who begins to question the line between wrong and right and must determine where her allegiances lie. A truly harrowing look inside the strong bonds between girls, all struggling for acceptance, friendship and power.

When President Roosevelt needs a spy to travel through Europe, investigating the actions of German adversaries, he calls upon the unlikeliest of candidates — John F. Kennedy. Sent into Europe under the guise of doing research for his thesis, Jack must aid Roosevelt in putting an end to the money traveling into the United States from the Nazis, presumably to help influence the election in which Roosevelt is running for a third term. Jack finds himself immersed in a world of romance, money… and danger. After surviving a life of horrible medical conditions, Jack has no fear, no worry of death or injury. This all changes when a vicious killer makes his presence in the States known, indicating Hitler has more power and influence than originally suspected. Intricately weaving fact and fiction, Mathews gives readers a unique look at pre-World War II politics and a glimpse inside the world of one of America’s most cherished families.

Rory Mackenzie, forced to her small hometown of Ransom River after losing her job, has been named juror in a high-profile murder case. Rory can’t get her mind off her painful past, now made fresh due to her return. She should be paying more attention to the case involving two police officers killing an unarmed man, the son of a known mafioso. When an attack is made on the court house and Rory finds herself with guns pointed toward her, she realizes that aspects of her past she’s kept hidden link her to an old cold case. Revealing these secrets would destroy her and the quiet, calm facade that surrounds Ransom River. A truly heart-stopping, out of control, thrill-ride of a book!

In the fourth novel of the Dublin murder squad series, a family is found in a half-built, luxury development. Three out of the four family members are dead — Patrick Spain and his children. The only survivor is his wife, Jenny, now in intensive care. Veteran detective Nick Scorcher is assigned the case, joined by his rookie partner, Richie. Scorcher initially believes they’ll close this case quickly, but information they uncover sheds doubt on the investigation. Scorcher’s return to Broken Harbor awakens memories he’s attempted to keep buried in his sister, memories of an event that happened to their family when they were children. Scorcher is forced to split his attention between controlling his psychotic sister and the case at hand. A highly-anticipated, atmospheric psychological thriller!