The Real Housewives of Orange County star has been in a roller-coaster romance with Slade Smiley for three years. So, naturally, what’s a girl to do? Make baby plans, of course, and advertise them all over Twitter! 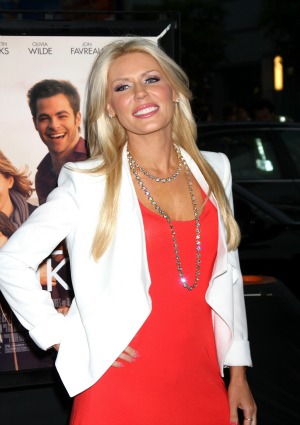 Unlike new mother Sienna Miller, who has been famously tight-lipped about her pregnancy, avid “Tweeter” and star of the multimillion-dollar Bravo franchise that is Real Housewives, Gretchen Rossi, took to the social networking site to talk all things baby.

Hey, at least we won’t have to hear all that endless talk about the blonde’s new haircut!

When one of Rossi’s 302,000 followers asked: “When are you and slade gonna have babies?!”, the 30-something delivered: “Hopefully soon!”

Does she have a preference, girl or boy?

“Ill be happy with either! But slade has 2 boys so a girl would be fun for him ya know,” she tweeted.

Speaking of Slade’s kids, the entrepreneur has been accused of being a “deadbeat dad” by at least two of the other Housewives — Vicki Gunvalson and Tamra Barney.

Slade has two sons from previous relationships. One son is in his 20s; the other is 11 years old.

It’s no wonder then, if Slade really isn’t paying up, that he has generated so much hatred from not only other Housewives, but from the reality TV-viewing public.

Slade contends all he did was file for a “reduction of support” after his business took a nosedive during the recession.

But even Rossi has done nothing to help her longtime boyfriend’s image.

In fact, RadarOnline.com has reported that the star was “tired of taking care of Slade and paying for everything in his life.”

Really, should these two have kids?