You’d think it was Area 51 inside Sienna Miller’s womb — that’s just how “top secret” the intensely private actress has been about her pregnancy. But some details are beginning to emerge, following the 30-year-old reportedly welcoming her first child with fiancé, Tom Sturridge. 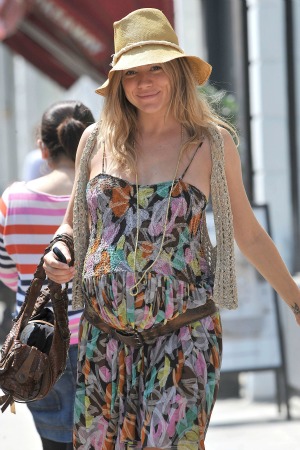 Us Weekly is reporting it’s a girl for British actress Sienna Miller and her hubby-to-be, Pirate Radio star, Tom Sturridge.

As basic as that detail may seem, it’s been no small feat to pry any information from the intensely private Brit.

A source, by way of Us, notes the baby girl made her debut in London this weekend.

The birthdate and weight seem to be anyone’s guess outside of the proud mama and papa’s close circle of friends, which include Sturridge’s BFF Robert Pattinson.

Even the gender was unknown until Monday morning.

This mystery appears to be in keeping with Sienna’s wishes from the start of not only her pregnancy, but her relationship with Sturridge.

While the pair reportedly have been dating for over a year, they didn’t go public with their relationship until Sienna was seen with a ring on it in February. Surprise!

And it was her younger sis who spilled the beans about the couple’s impending baby. Eventually, even the famously petite actress can’t keep a baby under wraps.

In a rare moment, Sienna opened up (kinda) to British Vogue in April, saying: “Even though I’m under strict instructions not to say anything as it would completely defeat the point of everything I’ve tried to achieve in the last eight years. I’m feeling fine… It’s all progressing nicely and it’s very exciting.”

Bloggers speculate that Miller’s still gun-shy from that whole “my ex, Jude Law, humiliated me by getting it on with the nanny.”

The mistress and the eventual breakdown of the pretty couple’s relationship were front-page news for months.

So don’t expect to hear any, ahem, unique celebrity baby names from this one… at least not any time soon.