More “seasoned” TV watchers remember Ernest Borgnine for his roles in From Here to Eternity and the 1960s series McHale’s Navy. In later years, the actor who made more than 200 film and TV appearances gave a voice to “Mermaid Man” in SpongeBob SquarePants. 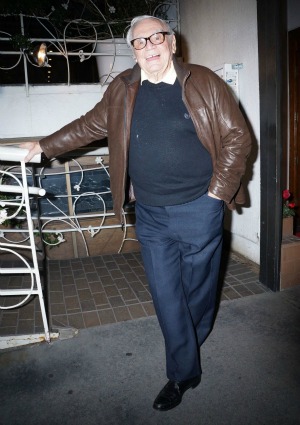 An eclectic mix of celebrities, from Flea of the Red Hot Chili Peppers to Star Trek actor Leonard Nimoy, united on Twitter to remember Ernest Borgnine.

Reuters reports the 95-year-old died Sunday at Cedars-Sinai Medical Center in L.A., with friends and family members by his side.

The actor was still a trending topic on Twitter Monday, as famous friends and fans paid tribute to a man whose Hollywood career literally lasted a lifetime.

He appeared in more than 200 movies and TV series from 1953 to 2012, breaking out in 1953 with From Here to Eternity, and gaining prominence a decade later in the World War II-era comedy, McHale’s Navy.

Borgnine left a big mark on the classic Dirty Dozen movies and you may also remember his guest appearances in some of Hollywood’s most popular TV shows, including ER, Little House on the Prairie, JAG, Home Improvement, and Touched by an Angel.

And, yes, he was still working until the end.

He didn’t let the number “95” stop him from completing what would be his final film — The Man Who Shook the Hand of Vicente Fernandez.

The movie is due out later this year.

A statement from the actor’s family, by way of Reuters, said the prolific actor “had been in excellent health until a recent illness.”

A longtime spokesman said Borgnine had surgery a month ago and was doing fine — until he went in for a checkup Tuesday. He deteriorated rapidly after that, eventually succumbing to kidney failure.

Stars of all kinds align to remember a legend

Flea from the Red Hot Chili Peppers recalled a 1969 classic: “Wow he was so great in the wild bunch.”

Leonard Nimoy tweeted: “Ernest Borgnine was helpful to me when we worked together on Wagon Train. Before Star Trek. A good man. RIP.”

From one legend to another, actress Barbara Eden shared her sympathies: “We lost another great guy today, Ernest Borgnine. My deepest condolences to his wife Tova and his family in this difficult time.”

And Marlee Matlin wrote: “So sad to read about passing of Ernest Borgnine. We spoke recently at Paramount’s 100th anniversary photo. A true legend & a gentleman. RIP”

What do you think was Borgnine’s greatest work?