Is Seth Meyers stepping into the light? After years on the night shift, he may join the morning talk show circuit. The actor, writer and potential host is one of the frontrunners to replace Regis Philbin on Live! With Kelly. 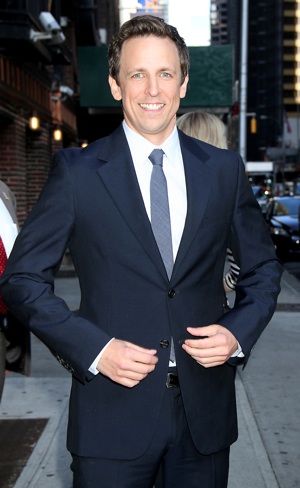 Funnyman Seth Meyers is ready to make a move. The actor currently serves as head writer and onscreen talent for Saturday Night Live, but he’s eyeing a new position. Meyers is one of three candidates rumored to join Kelly Ripa in the reboot of the Live! talk show.

According to Showbiz 411, Meyers, former football star Michael Strahan and singer Josh Groban are the producer’s top picks. It’s definitely an interesting bunch, but Meyers seems to have the upper hand.

Starting July 9, he’ll start a full week run as guest co-host, which hasn’t been done since Neil Patrick Harris filled in last winter. Even though fans love him, Harris’ busy schedule keeps him from having a horse in this race.

The site also notes the strategic scheduling of Meyers’ return. It’s in the middle of summer sweeps, which could be viewed as “a big test.”

Will Kelly Ripa’s husband Mark Consuelos be her new co-host? >>

Ripa is said to have a preference for silver fox Anderson Cooper, but he’s a busy bee. He already has two shows to his credit: CNN’s Anderson 360 and his syndicated talk show, Anderson. Throwing Live! into the mix would be too much, even for someone as talented as him.

Regis Philbin gears up for his final show >>

So what about Meyers’ current job at SNL? Apparently, he’d likely keep his position at the news desk. But may give up his head writer title. The schedules for both shows would be hard to balance.

What do you think? Would you tune in to Live with Kelly and Seth?