Lifetime TV cut a trailer for its new take on the classic relationship play Steel Magnolias. Except this version has a few crucial differences from Julia Roberts’ 1989 film. 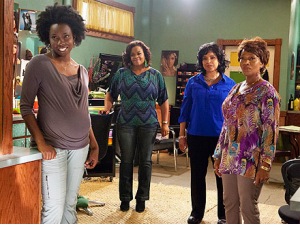 Hollywood’s the land of do-overs. If the industry isn’t rebooting the Spider-Man franchise, it’s trying to rejuvenate classic 1980s and ‘90s properties like Dirty Dancing or The Karate Kid.

At least the re-imagined take is taking a different path to reach new audiences. Lifetime TV is backing a new production of Steel Magnolias, and the ensemble matches the original when it comes to star power. Only, the Lifetime version is handing the reins to an African-American cast that includes Queen Latifah, Alfre Woodard, Phylicia Rashad and her Tony-nominated daughter, Condola.

“Surprisingly, Lifetime has a huge African-American audience,” producer Neil Meron tells The New York Post. “They want to honor that audience and give them more.”

The network is rolling the film out in the fall. But they are showing supreme confidence by unveiling a two-minute teaser trailer, which you can find on the program’s official website.

“It’s a classic story with classic characters,” Woodard told the Post earlier this week. “It’s not like we’re turning it into Big Momma’s House!”

That’s clear from the trailer, which — in true Lifetime fashion — goes right for the heartstrings by playing on the emotional bonds of mothers and daughters. Not that those who’ve seen the original film (or read the play) would be surprised. Steel Magnolias, when played properly, is a weeper, and this TV version looks like it’s hitting all of the sweet spots.