Rihanna graces the cover of the August issue of Harper’s Bazaar. Inside, she talks about everything from her shrinking body to her tumultuous relationship with Chris Brown. We never get sick of RiRi’s honesty. 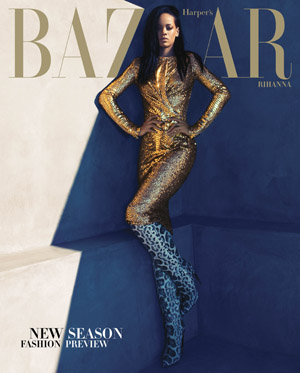 Does anyone else think that Rihanna needs to eat something? The Barbados-born singer graces the cover of Harper’s Bazaar looking like a mere shadow of her former voluptuous self. At first we thought it was a PhotoShop fail, but it turns out RiRi is just losing weight like crazy.

“I don’t know if there’s something going on with my body right now, but I’m eating everything in life!” she jokes in the interview, on newsstands July 17. “I miss my ass. It just went away! I need a butt. I have an idea of one, but it’s not living up to its full potential right now.”

We love her attitude, but we are a bit worried about her health — the singer is constantly on the go for either work or a party. She was even briefly hospitalized in April for exhaustion — and we’re not the only one who notices that she burns the candle at both ends.

Rihanna’s dad: So right or so wrong about Chris Brown? >>

“God, I thought I worked a lot,” her Battleship co-star, Alexander Skarsgard, told Bullet magazine earlier this year. “We would shoot until late Friday night and she would jump on a plane and go to L.A. to perform at the MTV Video Music Awards in front of a billion people, and then get straight back on the plane and fly to Hawaii, and go to set Monday morning with a smile on her face.” 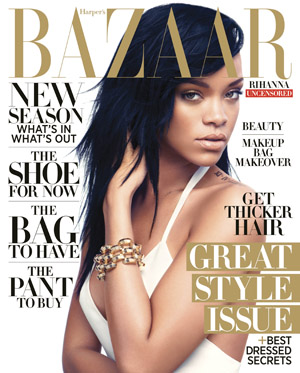 Yeah, that sort of lifestyle doesn’t lend itself to a healthy eating routine. Still, we’re sure that designers love it — the “Where Have You Been?” singer looks incredible in her editorial spread wearing drool-worthy designer outfits like a Calvin Klein silk crepe dress, Tom Ford dress and boots and jewels by Neil Lane and Repossi.

Of course, the interview couldn’t end without questions about her violent ex-boyfriend, Chris Brown. She’s painfully honest in the interview, though we don’t think she’ll ever get back with her bottle-breaking ex.

“When I was in love, I fell so hard. I was really, really, really in love. The way it made me feel was priceless,” she said. “And in a blink of an eye my whole life changed. Everything that I knew was different. I never thought I’d feel that pain in my life. I’m afraid of feeling that again.”

We’ve all been there, RiRi.

Do you think Rihanna is getting too thin?