Pink is finally giving us more details on her upcoming album. The mom of baby Willow just revealed the title of the September release. We wonder if the name refers to her new role as mommy? 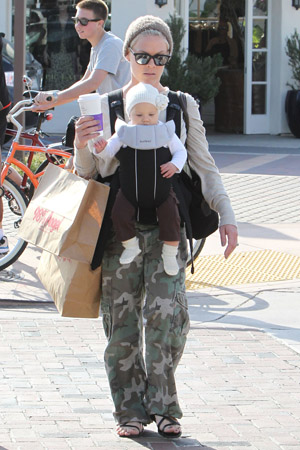 Pink is finally giving us some new music — and her album is going to give us The Truth About Love. Seriously, that’s the name of the album — she officially revealed it today in a short (and funny!) video clip.

“I have something really important to talk to you about today,” the singer, clad in a see-through mesh top and Lady Gaga-esque electrical tape over her nipples. She then cracked up, telling fans the name of the album due out on Sept. 19.

So, what’s the truth about love? We bet it has something to do with being a mom. The outspoken singer gave birth to daughter Willow Sage Hart in 2011 and she’s rarely spotted without her. It even sounds like baby Willow will make her debut on the album, a la Blue Ivy Carter.

“Willow played bells and bass on a couple of other songs,” she recently told fans. “I think you’re really gonna like it ’cause I really like it and I like it enough for all of us!”

It sounds like motherhood is agreeing with the Pennsylvania-born singer, but she told Cosmopolitan that old habits die hard.

“I’m used to going into the studio and smoking and drinking until three in the morning. But I can’t drink as much because I’m breastfeeding,” Pink said in the June 2012 issue. “I’ve exorcised a lot of my demons, but I’m still working on myself. I think I’ll be a work in progress for the rest of my life.”

The first single off the album — “Blow Me (One Last Kiss)” — is full of Pink’s trademark snark and attitude. It’s scheduled for release on iTunes starting July 9.

Are you pumped for Pink’s new album?