Actress Holly Robinson Peete — and thousands of other parents of autistic children — gave a verbal beatdown to 50 Cent after he told a Twitter follower that he looked “autistic.” Find out how the rapper responded. 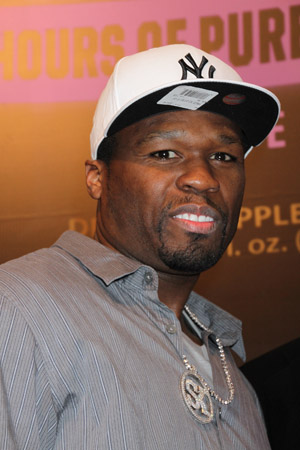 “Yeah i just saw your picture fool you look autistic,” Fiddy tweeted back after a follower insulted him. “I dont want no special ed kids on my time line follow some body else #SMSaudio.”

Naturally, that upset the mothers of autistic children — and for good reason. The pack of moms — led by actress Holly Robinson Peete — wrote messages to the “In Da Club” rapper that ranged from mild to infuriated.

“I’ve met you in passing over the years and I know you are a bright, astute businessman and legitimate philanthropist so it is with a bit of sincere confusion that I ask you…” Robinson Peete wrote in an open letter on her foundation’s website. “Do you even know what autism is? And what exactly does ‘autistic’ look like? Do you know how wildly prevalent autism is? 1 in 88 have it. That’s 1 in 54 boys. Families suffer a social stigma you will never know.”

“I hope you can see how what you might see as a benign insult — or not — was so randomly hurtful, immature and misinformed. Maybe you are naive or indifferent as to how many of your fans might be deeply and personally offended by your insult. At the very least-can you please delete it? If you’ve read your mentions today I am sure you have felt the wrath of autism parents. We are no joke. Neither is autism,” she continued. “Finally, this is my son Rodney Peete. He has autism. So I guess this is what autistic looks like? He is in special ed. He loves rap music and is a HUGE fan of yours. He’s a tremendous kid. He has to deal with so much trying to fit in. This isn’t helping.”

Apparently 50 did get the message — he ultimately deleted the tweets in question. His reason? Well, he has special needs too, so he can use it.

“Just kidding about da special ed kids man, i was in special ed day said i had anger issues lol,” he wrote.

LOL indeed. Or, not.