Jerry Seinfeld’s returning with a new program. And he’s bringing high-profile comedians and Seinfeld alumni with him. But you won’t find it on TV. So where will he be? 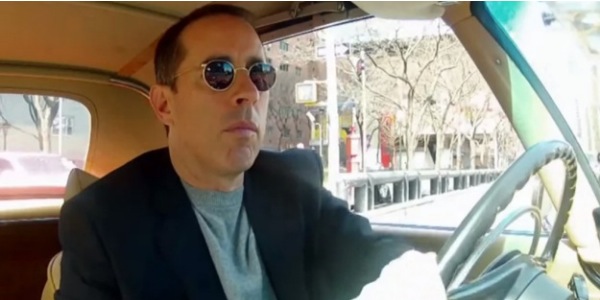 Jerry Seinfeld loves vintage automobiles. He also enjoys hanging out with high-profile comedians. Why not put the two of his favorite things together and package it as a new, entertaining program.

Seinfeld apparently is launching the new show Comedians in Cars Getting Coffee, which will feature the mega-successful stand-up… well, driving in his car with famous friends as they head out to grab coffee. We want to make a joke that it sounds like a show about nothing, except Seinfeld beat us to that punch line years ago.

The idea of Seinfeld returning to any form of broadcasting is reason to celebrate, though you won’t be able to find Coffee on network television, which is a bit of a disappointment. Instead, the new show will run on Crackle.com, where it will make its debut on July 19.

An esoteric trailer surfaced online teasing the show. It features exactly what you’d expect from the title: Seinfeld climbing behind the wheels of various automobiles so he can carpool with comedian friends.

But it’s the “friends” in question who will have us tuning in. Seinfeld has high-powered colleagues, and the spot showcases Ricky Gervais, Alec Baldwin, Colin Quinn, Seinfeld alums Larry David and Michael Richards, and Brian Regan for assorted interludes. None of them get to say anything — well, Gervais almost gets to say something.

And yet, despite the fact that the clip shows us nothing, it managed to get me very excited for this program (which I knew nothing about but now have bookmarked).

Comedians in Cars Getting Coffee will be online beginning on July 19. You can learn more about it on the show’s official Web site. And make sure that you are following Seinfeld on Twitter (@jerryseinfeld), where he’s bound to tease even more as we get closer to release.