Arguably the most-watched athlete at this year’s Olympics, Usain Bolt has been sidelined from competing at a meet in Monaco in two weeks. The big question has turned from: “By how much will the world’s fastest man beat the pack?” to “Will Bolt win?” 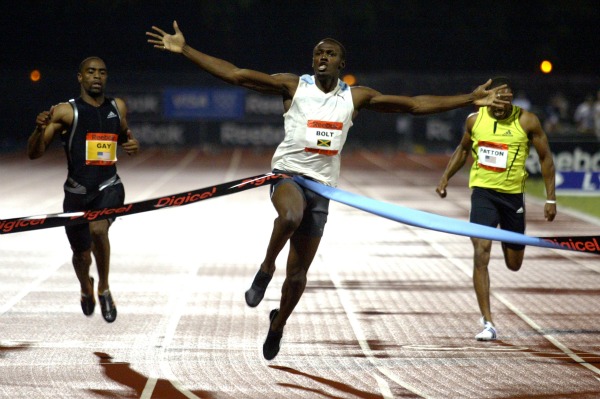 News that Usain Bolt is out of the meet, held just days before the start of the Games, comes off stunning upsets at the trials in the sprinting phenom’s hometown of Kingston, Jamaica.

The Associated Press reports the world record-holder’s right hamstring was stretched out following losses to teammate Yohan Blake in both the 100-meter and 200-meter races.

Coach Glen Mills said Thursday that Bolt’s withdrawal from the Diamond League meet in Monaco on July 20 was due to a “slight problem” suffered at the trials.

“After careful assessment I have had to withdraw (Bolt),” Mills said, noting he wanted to give the sprinting superstar “time for treatment” and “time to train and prepare” for London.

Is he still the man to beat?

The meet comes just seven days before the official start of the Summer Games, and almost two weeks before the prelims for one of his two signature races — the 100 meter.

The 25-year-old holds a 9.58 second world record in the 100 (Berlin, 2009) and shattered Olympic records the year before at the Summer Games in Beijing — blazing down the track in 9.72 seconds for the distance.

Between this latest announcement and big losses to a fellow teammate this weekend, tongues are wagging that Bolt isn’t in the dominant form we’re used to.

It’s no wonder Bolt has become a household name, endorsing everything from Puma athletic gear to multimedia giant Virgin.

It’s also no wonder a quick search of Bolt conjures up questions about whether Bolt can run faster than a cheetah or a bear.

Someday (maybe soon) he’ll be left in the dust

There’s no taking away, even amid these troubling injury reports, that Bolt still reigns as the fastest human.

While a long shot, a world-class sports scientist that ESPN consulted has asserted that, someday, Bolt could be left in the dust in a big way. We’re talking a sub-9 second showing in the 100.

The stars must align for that to happen. They surmise it will take a good 50 years for this to happen, as the population continues to grow and the pool of standout sprinters grows with it.

Some naysayers are already wondering: Will Bolt be left in the dust much sooner — in the coming weeks?