Dear Loyal Readers, I’m going to let you in on a little secret. Being a feature entertainment writer can be challenging when celebrities don’t cooperate. Sure, Tom and Katie got us through a couple days, but outside of the few Tom-isms we can expect to see in the coming days, we need some new material. Here is what’s happening in celebrity headlines, followed by suggestions to make these stories interesting… 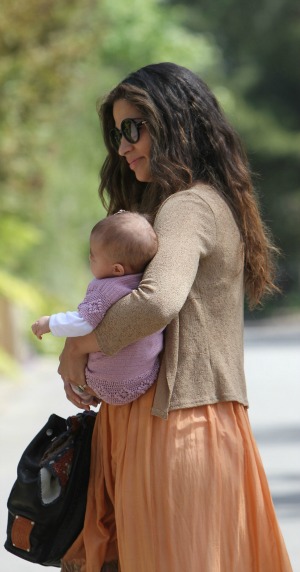 Cool. Mr. and Mrs. Supremely Gorgeous are spreading their genes around again. I’m not trying to be cynical here. Baby news is exciting… when you’re family. Or if it’s your first kid. This is baby #3 for this dynamic duo. Nauseatingly attractive people expanding their family just isn’t that riveting, unless Matthew pops off and says something outer-limits about eating the placenta while getting higher than a kite and playing naked bongos.

The first time Camila was pregnant, Magic Matthew gave us something we could work with by saying his son was going to bring the world great joy someday and that he was going to plant the placenta under a tree. “It’s going to be in the orchards and it’s going to bear some wonderful fruit. When I was in Australia, they had a placenta tree that was on the river… and all the placentas of all that tribe, all that clan, whatever aboriginal tribe that was, all the placentas went under that one tree and it was this huge behemoth of just health and strength.” See? That’s what I’m talking about.

Which is also not that interesting. Of course, congratulations are in order. Or are they? Whenever I hear of celebrity pregnancies (and you can’t throw a Rolex in Beverly Hills without hitting a pregnant lady right now) I always think the same thing. Oh, they are having sex like most of the human race. And now they’re in a family way. That’s math, not news. Maybe I’m just jaded because every morning I scour the headlines for something not mind-numbing to write about and lately all I see is proof that there is some kind of birth control shortage in Hollywood. Again, if I was Claire’s sister, I’d be thrilled. Now, if Claire said that she had been kidnapped by the Mother Ship, injected with Charlie Sheen’s tiger blood and is now pregnant, that’s giving me something I can use.

Claire Danes and Hugh Dancy announce they are expecting >>

Alec Baldwin lashing out against photographers

Alec is funnier than hell, and you can’t take that away from him. His politics may not align him with middle America, or how he conducts his personal life (he also got married in the last few days to a 28 year old… snooze. “News” of her pregnancy will likely be forthcoming). But we’ll watch him all day on SNL and 30 Rock because he cracks our sh** up. Him spewing profanities at the paparazzi isn’t feature-length material. As the reader, you don’t want me to use 450 words to say, “Alec Baldwin called a photographer a little girl and squeezed the photog’s arm. Again.”

If Alec Baldwin were to go all Office-Space-printer-scene on a photographer, that would be the stuff feature entertainment writers dream about! You remember when the guys from Office Space quit their jobs, took the printer that had been jamming repeatedly to a remote field and beat the tar out of it? Alec if you’re reading this, might we suggest that some bad a** rap music be playing in the background for optimum effect. Oh, and be sure there is footage of the paparazzo stalking and taunting you ahead of time to solicit sympathy. That’s the kind of headline I’m looking for, umm-kay? (Note: Of course I am kidding, and would never condone an Office-Space-printer-beating. Use your words, people, even if it doesn’t give me anything to write about!)

Really? Jillian was playing along quite nicely when she confirmed that she was a lesbian and that she and her partner had two babies in one week. That’s the stuff interesting articles are made of. But Jillian slipped this week with this little bit of “news.” This is what people think when they skim this headline: “I’m sure she has three more exactly like it and it is insured, so why do I care about that?” If Jillian wanted to hook a sister up with useful material, she should have strapped on her cape, ran after a speeding Bentley using her bionic muscles with a kid on each hip, scaled the Kodak theatre, landed on the roof of the Bentley and booted the thief out from behind the wheel, all while strapping the babies into their car seats and turning the car around. Is that asking so much?