Some of our favorite films are the summer romances that tug at our hearts and turn us into total crybabies. We’ve rounded up some of the best romantic tearjerkers along with suggestions for the perfect ice cream pairing. Grab a spoon, press play and enjoy! 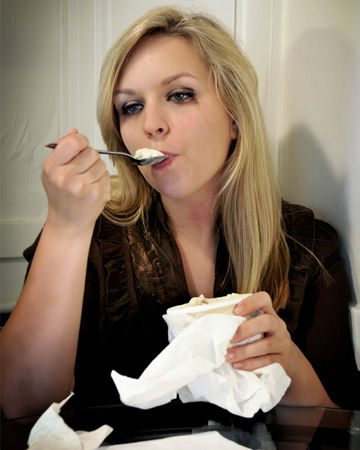 The 1993 hit film Sleepless in Seattle is based on the the 1957 film An Affair To Remember. While the climax of the movie is when Sam Baldwin (Tom Hanks) and Annie Reed (Meg Ryan) meet on the observation deck of the Empire State Building,  the scene that chokes us up the most is when Sam calls in to a late night radio program to talk about how much he misses his wife after her death. “Sam,” says the radio host, “Tell me, what was so special about your wife?” His reply: “Well, it was a million tiny little things… and I knew it the very first time I touched her. It was like coming home – only to no home I had ever been to. I was taking her hand to help her out of a car… and it was like… magic.” Tissues, please.

The Wedding Singer (1998) stars Adam Sandler as Robbie, an aspiring rocker moonlighting as a wedding singer. When he meets waitress Julia, played by Drew Barrymore, they strike up a friendship, but they’re both engaged to others. At the end of the film, Robbie boards a plane to Las Vegas to stop Julia’s wedding, then discovers that she and her fiance are on the same flight. He enlists the help of fellow first-class passenger Billy Idol (yes, the Billy Idol) and delivers a serenade in true Adam Sandler style. “I’ll get your medicine when your tummy aches, build you a fire if the furnace breaks. Oh it could be so nice, growing old with you.”

In this 1996 film, Tom Cruise plays Jerry Maguire, a driven sports agent who suddenly gains a conscience and loses his fiance (Kelly Preston) and his job in the process. Jerry’s staff accountant Dorothy (Renee Zellweger) supports Cruise as he starts his own agency, and eventually the two marry. Their relationship falters when Dorothy believes Cruise doesn’t love her. Fortunately, Maguire figures out his priorities and shows up at Dorothy’s house to declare his love with the now-famous line “You complete me.” Come on, what girl isn’t going to fall for that? When Renee crunches up her face and says “Shut up… you had me at hello,” it’s hard to hold back the tears.

Writer and filmmaker Nora Ephron gave us some of the best romantic comedies ever made, including When Harry Met Sally, Sleepless in Seattle, and You’ve Got Mail. Ephron passed away in June 2012, but her legacy lives on. When Harry Met Sally (1989) follows the 12-year friendship of Harry (Billy Crystal) and Sally (Meg Ryan) and explores the question “Can men and women ever just be friends?” It’s pretty much impossible not to cry when Harry shows up on New Years Eve and shares his true feelings to Sally: “I love that you get cold when it’s 71 degrees out. I love that it takes you an hour and a half to order a sandwich… And it’s not because I’m lonely, and it’s not because it’s New Year’s Eve. I came here tonight because when you realize you want to spend the rest of your life with somebody, you want the rest of your life to start as soon as possible!”

Watch: Not all love stories have a happy ending

Here’s a scene from the hilarious yet heart-breaking My Best Friend’s Wedding:

More of our favorite movies