It has all the makings of a nerdy joke. But it seems the controversial British physicist really did put some money (note “some” — money is still money) on the line over the “God particle.” Stephen Hawking thought what has been hailed as the key to unlocking the secrets of the universe could never be found. 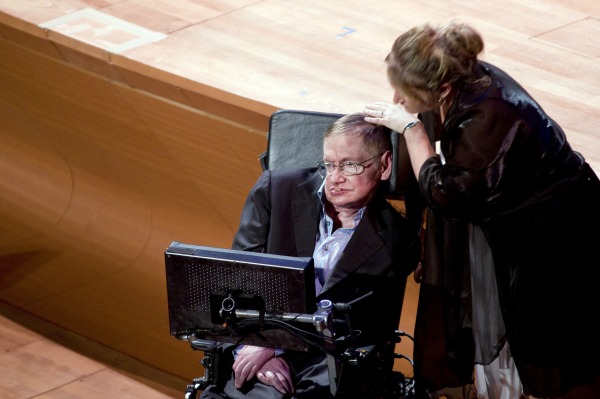 Much to the dismay of Kirk Cameron, a group of physicists set off some fireworks Wednesday when they announced to the world, “Eureka! We found the God particle.”

But, in a rare turn for the physics set, The New York Times reported that 1,000 people stood in line all night to get into an auditorium at the world’s biggest particle physics lab in Geneva, Switzerland.

The “rock star” of the day was Peter Higgs, the theoretical physicist who the “God particle” is named for. If we want to get technical, the particle is actually called “Higgs boson,” with a boson being a class of subatomic particles.

But “God particle” certainly has a nicer ring to it.

So why the rock concert turnout?

These findings have been likened to the quantum mechanics breakthroughs of the 1930s.

Media outlets, citing physics academics and scientists ’round the globe, say the discovery helps us understand one of the big universal questions: “What are we made out of?”

These findings help to explain “why” objects gain mass.

Without this mass, particles would just flit around at the speed of light through the cosmos. They’d never bind together to form anything and everything in the universe.

And “kind of a big deal” physicist Stephen Hawking thought the elusive mass-giving particle could never be found.

A bet the Brit waged with another physicist about Higgs’ research went buzzy Thursday morning.

While Hawking told the BBC he said Higgs deserved the Nobel Prize, he had little faith in the scientist’s undertaking.

“I had a bet with Gordon Kane of Michigan University that the Higgs particle wouldn’t be found,” Hawking said.

But maybe the world’s most famous physicist had more faith in Higgs than he’d lead us to believe, given the low dollar amount at stake.

It’s estimated that Hawking is worth some $20 million.

Granted, maybe the bet was a lot more equitable to the other party. How many scientists, especially physicists, are household names after all?