The punchline of many a tasteless joke about crime and city decline, Detroit may be getting a little help from Hollywood’s zombie trend. 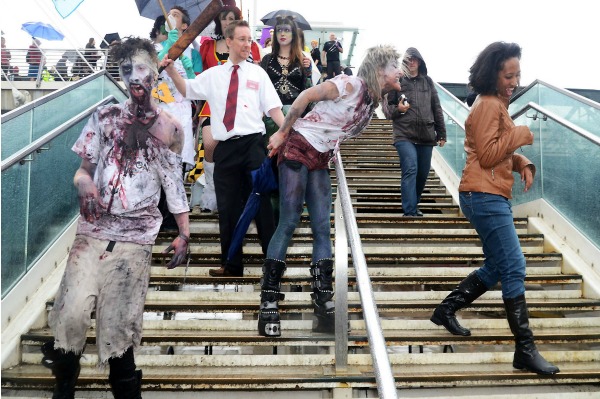 Instead of reading a zombie book or watching a zombie movie à la World War Z, Matt Siwak wants you to experience the “real” thing.

Siwak hopes to build a theme park dedicated to the ghoulish undead on a 200-acre abandoned site in Detroit.

And Detroit has plenty of abandoned areas to choose from.

It’s been widely reported that the city, once home to more than 1 million people, has lost a quarter of its population in the past decade. The auto industry sputters and stops. Plants that once churned out American-built cars close. The rest is history.

But Siwak hopes the attraction will make Detroit a destination and provide jobs to residents who sorely need them.

“The city of Detroit is considering literally abandoning sections of the city,” Siwak said, by way of website Indiegogo. “While the economic and social benefits of this action can be debated. We think the situation demands more creativity.”

According to its fundraising site, it sounds like you’re living inside of a video game.

You literally fight your way through the park, fending off a growing horde of the undead. Spooky.

Perhaps some of these zombies might be extras from Brad Pitt’s World War Z — as Siwak goes on to say the undead would be played by professional actors.

You’re not a “visitor.” You’re a “player.” You must establish a plan of action to survive the zombie apocalypse and find food and supplies along the way.

Among the logistical problems of establishing such a radical “game” on a huge, blighted site, bloggers also contend this is yet another way to exploit and “glamorize” Detroit’s serious crime and poverty problems.

While Siwak may have more supporters than just his family and friends, he’s got a long way to go to meet his initial fundraising goal of $145,000.

Siwak acknowledges this is a “radical rethinking” of how to heal a city in crisis.

You’ve got to hand it to someone for trying to take on issues that have been decades in the making.