The Queen is knocking Prince William’s wife down a peg or two, courtesy of recently released protocols. These protocols dictate how Kate and other royals behave. Off a buzzy mock ad, these revised rules are yet another reminder to the young duchess: You were born a commoner. And don’t forget it. 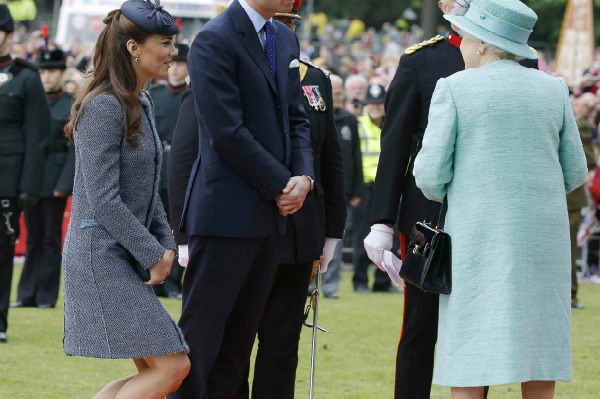 Unlike the TV spot where the Queen mocks Kate, these protocols are no joke.

For those of us Yanks across the pond, these protocols establish how you behave around other members of the royal family.

They also indicate where you fall in the royal pecking order.

With changes to these rules as an indication, Queen Elizabeth doesn’t think all that much of Duchess Kate.

The Daily Mail reports a document meant for “royal eyes only” is said to “clarify” Kate’s royal status.

By way of the U.K. paper, Kate must, “as a former commoner,” show reverence “to the ‘blood princesses.'”

What does this mean?

Well, the 30-year-old must quite literally curtsey to the other princesses.

“It’s a total humiliation for Kate,” a source close to the royal couple said, by way of Life & Style. “It’s like a demotion for her in the royal family, and the queen is the one who ordered this.”

Source goes on to indicate Elizabeth changed the rules mid-game because she’s jealous that Kate is hogging the spotlight.

“These moves from the queen are designed to remind Kate that just because she’s popular, she isn’t as important as the queen or any other royal-born family member,” the friend added.

These “revised rules” also seem to dredging up a lot of bad blood over Kate’s lack of royal blood.

Throughout Will and Kate’s courtship, stories would often surface about the Queen’s displeasure with Kate — particularly her lack of a full-time job while dating the prince.

Moreover, a royal historian predicted when Will married the former Kate Middleton that she would take the rank of her husband.

That means when Kate’s at court the princesses should curtsy to her — not the other way around.

So, again, this indicates the rules are more the Queen’s doing than “just the way things are” for the royals.

Of course, royal historian kinda sorta says what we all think: Can you imagine Beatrice and Eugenie curtseying to Kate?

They’re likely to think: “I was born into royalty. I’m not curtseying to the daughter of a flight attendant and party supplies distributor.”

Kate’s likely to literally just shut up and bow down, as sources have also said she’s been eager to please the family.

We all want to please our families at some point. Make a good impression to the boyfriend’s mom, for example.

But that’s a particularly tall order when your husband’s grandmother is the queen and you’ll always have been born a commoner.