The Sandcastle Girls, Chris Bohjalian’s most personal novel to date, switches between 1915 Syria and modern-day America to tell the story of how Elizabeth and Armen found love amid one of the most horrific events of the 20th century. 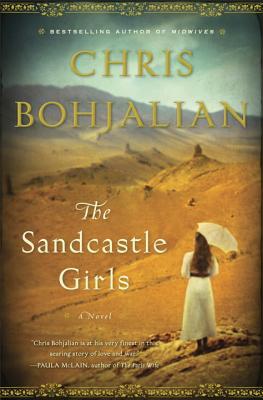 In 1915, Elizabeth, a recent college graduate with minimal nursing skills, accompanied her father on a mission to provide aid to Armenian refugees in Aleppo, Syria. Nothing in her upper-class Bostonian upbringing could have prepared her for what she saw when she reached the Middle East.

Armen, one of the few men to escape the Armenian genocide, was in Aleppo searching in vain for his wife among the refugees. Conflicted by what he had to do to save his own life and mourning the loss of his family, Armen volunteered to join the British forces to help fight the Turks. But before he left for the battlefield, he met Elizabeth, and despite their vast differences, a connection was formed.

In The Sandcastle Girls, Chris Bohjalian tells the story of Elizabeth and Armen’s relationship, from the unspeakable horrors they witnessed in 1915 to their comfortable life in America. In the 21st century, when their granddaughter Laura learns of a photography exhibit of the Armenian genocide, she becomes curious about the images and faces captured on film at the time Elizabeth and Armen met. As Laura searches for her family’s history, she discovers the heartbreaking truth of the genocide from both a personal and a historical perspective.

Bohjalian takes a multilayered approach in this novel, focusing on the genocide itself, the people who tried to help, a love story and the many ways in which the aftereffects of the nightmare trickled down through the generations.

The Sandcastle Girls is not always an easy story, because Bohjalian gives us the unvarnished truth of what the Armenians endured (torture, murder and rape) and what they had to do to survive. We also learn about the difficulties outsiders had in offering aid and solace and how ill-equipped many Westerners were to understand what had happened. In addition, we gain a newfound appreciation for the way that fate hangs on chance and timing and luck. And through Elizabeth and Armen, we see that hope and love can arise from devastation, but some experiences can never — and should never — be forgotten.

Chris Bohjalian’s very personal (although fictional) story of Laura and her search for answers about her grandparents and the truth of the Armenian genocide is one of his most moving and important novels to date. The Sandcastle Girls is a don’t-miss read of the summer.