Tom Cruise unseated Leonardo DiCaprio as Hollywood’s highest-paid actor. Forbes usually releases its buzzy list of the richest stars in August. But it’s not every year that Tom Cruise and Katie Holmes get divorced! 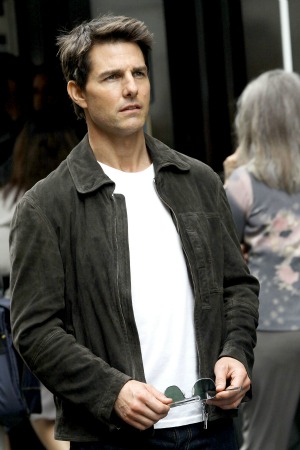 Forbes jumped the gun this year, in light of the impending TomKat knock-down, drag-out divorce.

As the world speculates about just how much $$$$ Katie will get by way of a settlement, Forbes goes public with just how much is at stake.

Cruise made $75 million in the past 12 months alone.

Compare this to Holmes. While nothing to sniff at, Good Morning America reports the star still best-known for Dawson’s Creek is worth about $25 million.

While the star of the barely watched J Edgar was last year’s most monied, this year DiCaprio tied with Adam Sandler. Yes. Adam. Sandler. The Guardian went so far as to say Leo “has to suffer the indignity of tying” with the Jack and Jill comic.

DiCaprio and Sandler, while tying for No. 2 on the “highest paid” list, earned a comparatively paltry $37 million over the past 12 months.

Cruise made more than double the next-closest contenders for Hollywood’s highest-paid.

So what does Katie stand to gain in this divorce?

Though insiders told GMA the mom of 6-year-old Suri will get a “suitable amount,” what exactly does that mean?

Alongside its “richest” list, Forbes provided some analysis of the Hollywood news that prompted the premature publication of the most monied actors this year.

The mag notes Cruise and Holmes reportedly got a prenup to cover alimony, but “prenups almost never include the cost of child support.”

In New York, it goes on to say, child support is based on a formula: 17 percent of the couple’s total income. Each person pays a proportionate amount.

Even so, divorce attorney Jeff Landers — by way of Forbes — notes that doesn’t mean Holmes is going to rake in $9 million for child support alone.

While Cruise managed to take “top honors” this year, that doesn’t mean he’s poised to do the same next year.

For one, his cheesy Rock of Ages flopped in a magnificently awful way.

But Cruise appears to have no dearth of other movie projects. The release of the Jack Reacher trailer coincided with the besieged actor’s 50th birthday. IMDb lists five more mega-projects, including 2013’s sci-fi thriller Oblivion and All You Need is Kill.

But what could be his big career-killer?

Yep. All this Scientology talk.

Whenever the “religion” resurfaces its ugly head, courtesy of big developments like the divorce of its highest profile follower, Cruise hurts (himself) in a big way.

Forbes puts it like this: “The religion has long been a passion for Cruise, and sometimes a P.R. problem.

“His career first started to falter back in 2005 not just because of his couch jumping antics but also because of a very awkward interview he did with Matt Lauer in which he talked about Scientology and his mistrust of psychiatry and psychiatric drugs,” the Forbes article continues. “If Cruise is once again forced to discuss Scientology in public, it could hurt him at the box office.”

But who stands to win in a big way?

We’re not just talking about how much she may or may not rake in here after the dust from the divorce settles.

We’re talking about Katie’s career. Now that she’s free from the clinches of the couch-jumping one, the 33-year-old’s career, too, could be winning.

Michelle Lee with Hollywood.com told GMA, “She’s an actress who had so much potential at first — fans were really hopeful that she would turn into a great actress.

“But I think her marriage really hurt her career. It seemed like directors and producers started to get a little scared of hiring her for projects because they didn’t want their project being overshadowed by the spectacle.”

Amen to that. It’s a little sad that we still think of her as “Joey” more than anything else. And Dawson’s Creek ended nearly a decade ago!

Didn’t you think we’d see more of Holmes, after she landed the role of Rachel Dawes in Batman Begins? That was way back in ’05.

But apparently the type of money-making success achieved by her husband wasn’t in the cards. Or, perhaps, it wasn’t in the Scientology contract?

21 mins ago
by Daisy Maldonado