Meg Cabot makes a triumphant return to the Heather Wells mystery series with her latest novel, Size 12 and Ready to Rock. 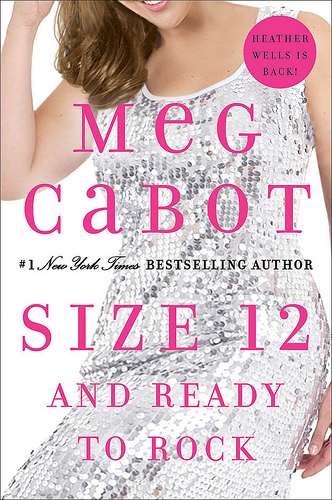 Heather Wells is back and in prime shape (well, kind of) in the latest novel from Meg Cabot. Heather was once a pop star sensation, until the pounds packed on and her label cut her because of it. She also lost her boy-band boyfriend Jordan Cartwright to her enemy and pop star replacement Tania Trace — but was able to find love again with none other than Jordan’s big brother Cooper. Fast forward, and Heather and Cooper are set to be married. She has a new job as an assistant residence hall director (a far cry from where she was once, obviously) at Fischer Hall. This New York College dorm is also known as “Death Dorm,” but Heather is determined to make the best of it. With summer break underway, the dorm empties of college students and fills with squealing thirteen- and fourteen-year-old girls attending the first ever Tania Trace Teen Rock Camp, put on by none other than Tania Trace herself. Heather braces herself for having to be around Tania — freshly married to her ex Jordan and with a baby on the way — but the situation gets complicated with the arrival of an ambulance. The producer of a reality TV show starring Tania is found dead, and it turns out Tania was the intended target.

Heather must now deal with teenage girls with diva-like behavior running around her dorm, paparazzi staked out in every corner, a reality TV show being filmed, a murderer on the loose, planning a wedding and keeping calm around Tania and Jordan. With her fiance, Cooper, hired on as the private investigator of the shenanigans, Heather knows full well she should leave the actual detective work up to him… but can she really keep her sleuthing skills tucked away?

Following the highly successful novels in the Heather Wells mystery series — Size 12 Is Not Fat, Size 14 Is Not Fat Either and Big Boned — Meg Cabot is bursting on the scene again with another must-read in Size 12 and Ready to Rock (on sale July 10). All the usual drama, intrigue, mystery and flair that Heather brings to the scene are wrapped up in this latest novel, and this is not one to miss for the summer!