Everybody’s got something to say about Rihanna and Chris Brown — including her father, whose words are not what one might expect a dad to say about the young man who left his daughter bloodied and bruised. 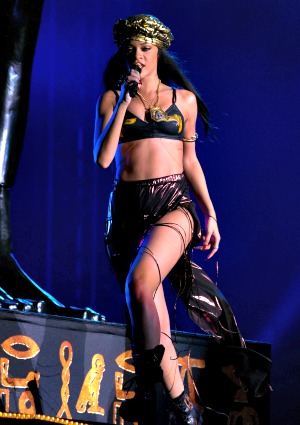 Rihanna’s dad is hoping his daughter and Chris Brown can rekindle their tumultuous romance. Shocked? Horrified? Saddened to hear his stance? Us too.

Rihanna‘s dad, Ronald Fenty, is either ridiculous to think Chris Brown has changed his girlfriend-beating ways, or possesses an uncharted ability to forgive and forget.

He recently told Britain’s Grazia magazine of Rihanna and ex Chris Brown, “Chris has matured a lot. I think everybody has to put the past behind them. And they seem to have done that.”

“Being a couple is all up to her,” Rihanna’s dad went on to say. “Every decision is her decision. I just wish her the best. I hope things will work out.”

Noting he isn’t the only one hoping his daughter reunites with the man who landed her in the hospital, Ronald Fenty added, “Everyone is entitled to make a mistake. Her fans are hoping it will happen. They see them as a perfect couple.”

Conversely, Chris Brown’s father has offered his son near opposite advice. Clinton Brown previously told Star magazine, “I do not condone everything that goes on with Chris, but I love my son with all my being. I am always concerned about him… He can make his own decisions. But, as a concerned parent, I would rather they not have any involvement… Sometimes you need to cut the strings and move beyond the past.”

Rihanna hasn’t yet publicly reacted to her father’s comments, but the 24-year-old did retweet her horoscope Wednesday afternoon, perhaps telling the world she’s still hearing what’s being said: “#Piscees are really good listeners. They not only hear what you say but what you mean.”

Do you think Rihanna’s dad has her best interest at heart?