In the new Spider-Man reboot, Andrew Garfield plays a web-slinging superhero with a supersize crush on Emma Stone’s Gwen Stacy. Offscreen, the actor harbors an equally “marvel”ous affection for the actress. As both are known to be exceptionally clever, we channel our spidey senses to pick a few other smartypants pairs to keep company with Emma and Andrew. 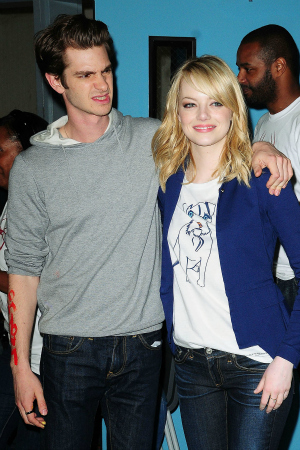 Sure, Jason Segel is funny, but the side-splitting star boasts super smarts as well. In addition to acting, Segel counts composing, puppeteering, screenwriting, and being a musician as extracurriculars. Plus, he wrote (and starred in) the so-hilarious-it’s-genius Forgetting Sarah Marshall. Need we say more? As for his soft-spoken squeeze Michelle Williams, she won the Robbins Trading Company World Cup Championship of Futures Trading at the tender age of 16 for taking $10,000 and turning it into $100,000 (I’m pretty sure at that age the only thing I was turning was over… to make sure I tanned evenly as I lounged by the pool). Michelle then broke into acting on Dawson’s Creek, but has moved from the sitcom’s high school hijinks to Academy- and Oscar-award nominated turns in critically acclaimed films, such as My Week with Marilyn. When she’s not reading scripts, the self-professed bookworm reads and collects rare books.

Are they or aren’t they? We may not be sure about their romantic status, but we are sure James Franco and Amanda Seyfried would make perfect partners for Emma and Andrew during a rousing round of team trivia. James Franco collects degrees like Lindsay Lohan collects court dates. After originally dropping out of UCLA to pursue acting, the star eventually completed his undergraduate education at UCLA in Creative Writing — even earning a reportedly staggering 62 credits in a single semester. He’s since racked up a Bachelor of Fine Arts in English from UCLA, Master of Fine Arts degrees in writing from Columbia and Brooklyn College, and a Master of Fine Arts in film from New York University. He’s been sneaking around lately with Amanda Seyfried, who may not be as learned as her beau (who is?!), but she did train in classical opera for two years and write one of the songs on the Dear John soundtrack. That’s something, right?

Before he made us fall in love with him as “Jim” on The Office, John Krasinski took a raincheck on his first semester of college to teach English in Costa Rica. He hit the books hard upon his return to get an Ivy League education, graduating with a Bachelor of Arts in English Literature and as an honors playwright from Brown University. Oh, and then he went on to study at the Eugene O’Neill National Theater Institute. Show-off! (Just joking. Sort of.) He made yet another smart decision in 2010 when he made Brit actress Emily Blunt his bride. Schooled at England’s top boarding school in her youth, Blunt has made big waves during her relatively short tenure in Hollywood thus far. She must be doing something pretty impressive: After appearing alongside the legendary Meryl Streep in The Devil Wears Prada, Meryl called Emily the best young actress she has worked with recently — and maybe ever.

Did you know? The following hot, young celebs studied at Ivy League universities and are considered some of the sharpest wits in Hollywood: Julia Stiles, Emma Watson, Matt Damon, Rashida Jones and Natalie Portman.