Is Kelly Clarkson gay? The singer has a thing or two to say about those persistent rumors — and keeping it country with her newfound love! 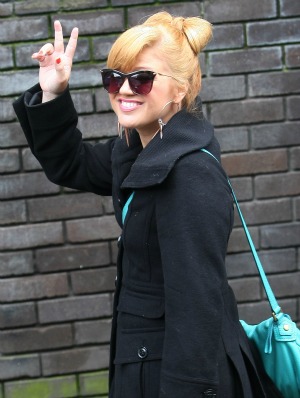 Kelly Clarkson gay rumors just won’t quit! Perhaps now that the singer has made an official statement regarding the lesbian gossip, as well as gushed about her new boyfriend, the rumors will finally die?

“Oh, there’s all these rumors that I’m a lesbian,” Kelly Clarkson mentioned while addressing her romantic life in the upcoming issue of Lucky magazine. “I have a boyfriend now, Brandon Blackstock, my manager Narvel’s son, Reba McEntire’s stepson?”

That’s right, Kelly Clarkson’s new boyfriend has quite a number of connections in the music world. Beyond being the son of Kelly’s manager, who just so happens to be married to Reba McEntire, young Blackstock is the manager of country singer Blake Shelton!

“People act like there’s this one set of rules to follow to be a pop star, and I think, ‘Well, you say I’m a pop star, so maybe that’s not true,'” the 30-year-old explained. “The hardest thing about being in this business is just being able to be yourself. Even though I’m a pop singer, I really have more the life of a country singer.”

Farewell to creativity: Kelly Clarkson is too happy for tears >>

It sounds like Brandon Blackstock is a great match for Clarkson, who considers herself “a really normal girl” even in the wardrobe department.

“I put on the Hank Williams and the Patsy Cline and the Rosemary Clooney on vinyl — I’m not trying to be some cool indie-rock person, I just love the way it sounds — and throw on a T-shirt and jeans,” she shared. “In Texas, we practically come out of the womb in jeans.”