Kathy Griffin is bursting with pride for Anderson Cooper, but she’s also worried. Find out why the funny gal never outed her friend, and just what she’s afraid might happen next. 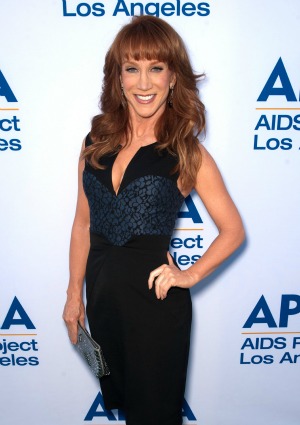 Kathy Griffin and Anderson Cooper are pals, friends. The kind of best buddies that keep each other’s secrets — which explains why she never outed the reporter before he was ready, and also why she’s looking out for his future.

While famous friends and the public alike are applauding Anderson Cooper’s coming out, Kathy Griffin has blogged a cautionary message for The Daily Beast in a post titled I Would Never Have Dreamed of Outing Anderson Cooper.

Of course, we all know Kathy Griffin the comedienne will make jokes at the expense of others, gay or straight, rumored or not. Here’s how she explains the difference between those jabs and keeping Cooper’s secret:

“Believe it or not, I don’t ‘out’ people. It is neither my business nor my desire. Remember, folks, I am a comedian, not a journalist. These weren’t questions where I could make a joke about Ryan Seacrest getting a mani/pedi. This isn’t a joke I make about whether Oprah and Gayle are gay lovers. I have no idea if Oprah and Gayle are gay lovers. I doubt they are, but as a comedian, I find some comedy in picturing those two girls running the world as a power couple. Anderson is someone who has led a very specific kind of professional life, who never talked and simultaneously exhibited social contradictions. And quite frankly, he never gave me permission to speak about something that represented the one part of his life he was not comfortable having confirmed in the media. But in my dealings with a certain sector of the press, that simply was never good enough.”

Star Jones: Anderson Cooper came out for the ratings! >>

In regard to her fears for Anderson, Kathy Griffin wrote of the climate in our nation’s geographic areas, “The reality is that despite the very real, the very necessary, and the very life-changing progress we have made in this country in treating people across the sexual orientation spectrum with dignity and respect, America—the world—is not fully represented by Chelsea in New York City… in large part, [it’s] small towns like Oxnard, Calif. It’s Sevierville, Tenn. It’s Laramie, Wyo. And it’s Wichita, Kan., where I was eating recently at a local diner and a patron asked me, ‘Kathy, how do you deal with so many goddamned fags?'”

Extending her look to the gay acceptance climate abroad, Kathy Griffin’s fears for her friend only multiply. She concluded her blog post by writing:

“Here’s the thing: I love my friend Anderson and remain immensely proud of him. And I’m honored, truly, that he considers me a friend. But I just want him to be careful. Of course he wouldn’t be doing his job if he really were being careful. And he wouldn’t be who he is.”

Do you think Kathy Griffin is right to be worried for Anderson Cooper?