The Amazing Spider-Man has arrived. Last night, the film debuted in theaters and pulled in some solid box office numbers. The latest incarnation of the webslinger is likely to dominate theaters over the 4th of July weekend. 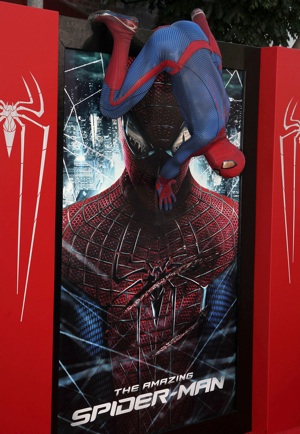 The wait is finally over. The Amazing Spider-Man has swung into theaters just in time for the holiday. Marc Webb’s adaptation of the popular Marvel comic made a splash Monday night for its anticipated debut.

Midnight screenings are typically attended by the most dedicated fans. They’re so excited that they skip out on sleep to get first dibs on their favorite movie. So how many came out to see Spider-Man’s reintroduction?

According to EOnline, The Amazing Spider-Man debuted with $7.5 million. Sony calls the tally, “a fantastic start,” and they’re projecting a six-day total of $110 million-$120 million.

That’s significantly less than its predecessor Spider-Man 3 (2007), which debuted with $151 million in only three days.

Overall, The Amazing Spider-Man’s midnight numbers are some of the best we’ve seen all summer. It only stands behind The Avengers, which grossed $18.7 million. The film currently has a 75 percent on Rotten Tomatoes, which means its holding steady with a “fresh” rating.

The Amazing Spider-Man tracking right behind The Avengers >>

The movie is a re-imagining of Spider-Man’s origin story, which we previously saw in Sam Raimi‘s 2002 adaptation. In Webb’s version, it focuses on the mystery surrounding the disappearance of Peter Parker’s parents. It also ropes in Dr. Curt Connors, who serves as his nemesis.

Both characters go through life-changing transformations. Peter goes from angsty teen to brave superhero, and Connors goes from scientist to a mutant lizard. Sounds like a match made in comic book heaven.

Did you catch a midnight showing of The Amazing Spider-Man? What did you think?