Nicki Minaj is making her big screen debut… well, sorta. The Pink Barbie is set to lend her voice to Steffie, a woolly mammoth in Ice Age: Continental Drift. Check out our exclusive first look at her character!

Nicki Minaj now has something in common with Ray Romano, John Leguizamo, Queen Latifah, Peter Dinklage and Jennifer Lopez: They’ve all lent their voices to the upcoming installment of the popular animated series Ice Age!

Minaj is set to voice Steffie, a girly woolly mammoth, in Ice Age: Continental Drift — and SheKnows has the first look at the character. So what’s this sure-to-be adorable animated feature about?

“Scrat’s nutty pursuit of the cursed acorn, which he’s been after since the dawn of time, has world-changing consequences — a continental cataclysm that triggers the greatest adventure of all for Manny (Romano), Diego (Denis Leary) and Sid (Leguizamo). In the wake of these upheavals, Sid reunites with his cantankerous Granny (Wanda Sykes), and the herd encounters a ragtag menagerie of seafaring pirates determined to stop them from returning home,” FOX told SheKnows. 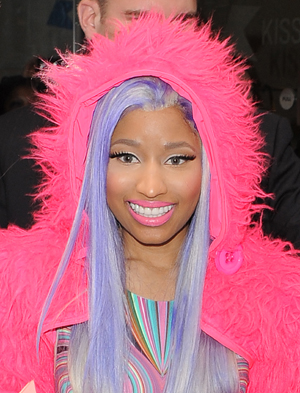 Love. It. We adored the other three films in the series and we’re sure this one won’t disappoint — especially with such an eclectic cast. It’s not uncommon for musicians to evolve into the acting world, but Minaj actually has experience with the art form: She attended the prestigious LaGuardia High School for Performing Arts in New York City.

“It made it feel very natural and very comfortable to just jump back into what I was doing in the beginning with acting, in being very animated and being very crazy and using your voice as if a person can’t see you,” she told Flicks and Bits of going back to acting. “The voice, it’s so incredible because a person shouldn’t even have to see you to know what you face looks like, kinda — or what your face is doing. It’s kind of an exercise because I do it in rap, you know?”

“I remember with my first audition, I walked across the studio lot and there Drake was,” Minaj remembered of getting the part. “He had already gotten the gig and I was telling him how much I hated him. He was like, ‘What, what? I didn’t even have to audition. They just gave me the role,’ he was completely rubbing it in my face. And so I asked him, ‘What are you?’ And he was like, ‘A mammoth.’ So I was cracking up, laughing at him — I’m like, ‘Definitely if I’m in the movie, I’m gonna a cute little spicy thing.’ And of course I’m a mammoth.”

Hilarious! We’re sure both of their characters will have lots of swag — we wouldn’t expect anything else.

Images courtesy FOX and Will Alexander/WENN.com