Yes, it’s true. After years of speculation, Anderson Cooper came out. And the veteran CNN journalist did so in a lengthy email to The Daily Beast’s Andrew Sullivan. 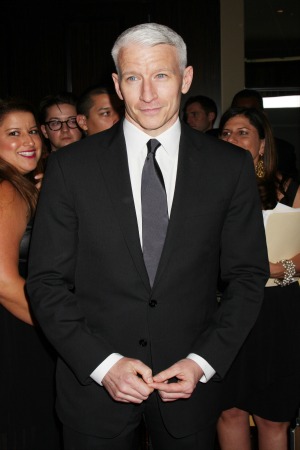 In the email, published Monday morning by Sullivan — Cooper’s friend of more than 20 years —  the journalist says: “The fact is, I’m gay, always have been, always will be, and I couldn’t be any more happy, comfortable with myself, and proud.”

Critics have long accused the Anderson Cooper 360 star of living in a “glass closet.”

And while he’s spoken out about bullying and the negative use of the word “gay” in movies (as in, this or that is “so gay”), the son of Gloria Vanderbilt has lived a very public life… closeted.

So what would prompt the “Silver Fox,” after all these years, to come out in an email?

Well, the method of coming out seems fitting. That is, when you consider the email was in response to an Entertainment Weekly story that addressed the “emerging trend” of gay people in the public eye coming out in “much more restrained” and “matter-of-fact” ways.

Sullivan, for his part, is encouraged by this development. But, in his preface to the email written by Cooper, he notes that it’s still important — even if we aren’t hit upside the head with a “COMING OUT” — that there is, still, a coming out on record.

“We still have pastors calling for the death of gay people, bullying incidents and suicides among gay kids, and one major political party dedicated to ending the basic civil right to marry the person you love,” Sullivan writes. “So these ‘non-events’ are still also events of a kind; and they matter. The visibility of gay people is one of the core means for our equality.”

In it, he discusses how who a reporter votes for, their religion or who they love “should not be something they have to discuss publicly.”

Cooper admits that he’s been directly asked the “gay question” through the years. But he stuck by the following principle — that his “private life shouldn’t matter.”

“I did not address my sexual orientation in the memoir I wrote several years ago because it was a book focused on war, disasters, loss and survival,” Cooper continues. “I didn’t set out to write about other aspects of my life.

“Recently, however, I’ve begun to consider whether the unintended outcomes of maintaining my privacy outweigh personal and professional principle,” he added. “It’s become clear to me that by remaining silent on certain aspects of my personal life for so long, I have given some the mistaken impression that I am trying to hide something – something that makes me uncomfortable, ashamed or even afraid. This is distressing because it is simply not true.”

Cooper then said there is value in “making clear where I stand” and in making himself “fully visible,” alluding to some of the things his friend, Sullivan, talked about to kick off the revelation: the “far too many” incidences of youth who are bullied, the discrimination and violence against people based on their sexual orientation.

While Cooper said that, in a perfect world, his sexual orientation wouldn’t be “anyone else’s business,” and noted he’s always “been very open and honest about this part of my life with my friends, my family, and my colleagues,” he stressed throughout the email that: “There is value in standing up and being counted. I’m not an activist, but I am a human being and I don’t give that up by being a journalist.”

The journalist ends by saying: “I still consider myself a reserved person and I hope this doesn’t mean an end to a small amount of personal space. But I do think visibility is important, more important than preserving my reporter’s shield of privacy.”

Did Anderson really have to come out after all these years?