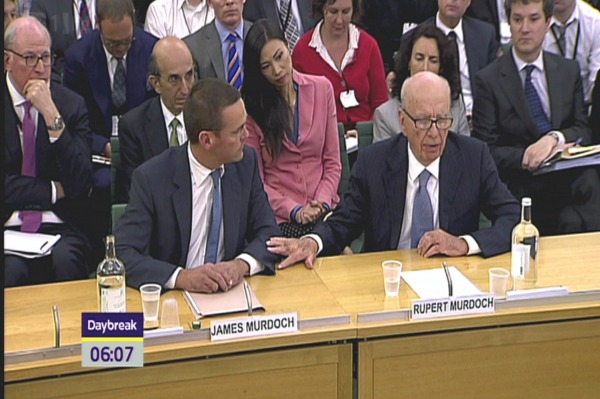 Apparently, Tom Cruise and Katie Holme’s split was so stunning to Rupert Murdoch that the media tycoon took to Twitter Sunday to weigh in.

“Scientology back in news. Very weird cult, but big, big money involved with Tom Cruise either number two or three in hiearchy,” he tweeted, obviously in a big hurry (he means “hierarchy”).

The Aussie-born News Corp. founder also goes on to say: “Watch Katie Holmes and Scientology story develop. Something creepy, maybe even evil, about these people.”

It’s no secret that Tom Cruise has been a longtime adherent of the controversial religion.

Miscavige was even Cruise’s best man during his third marriage to Katie Holmes in late 2006.

It’s also widely believed Miscavige orchestrated the marriage. That is, if you buy into the conspiracies about Holmes “auditioning” for the “part” of Mrs. Tom Cruise.

Depending on your political leanings, and feelings about News Corp.’s tactics to get “news,” you might say to Mr. Murdoch: “Pot, meet kettle.”

After all, it could be said that Murdoch is an evil genius behind his own evil empire, which includes Fox News and the Wall Street Journal.

So you may get a sick thrill from seeing that Scientology, which is widely known for mercilessly going after its critics, is now harassing the polarizing businessman.

“Since Scientology tweet hundreds of attacks. Expect they will increase and get worse and maybe threatening,” Murdoch tweeted. “Still stick to my story.”

Naturally, because this is a big election year, Mitt Romney and his religion, Mormonism, also came up as a topic of conversation on Twitter.

Murdoch retweeted the following statement: “Mormonism a mystery to me, but Mormons certainly not evil.”

Hmmm… wonder if he would claim the same if a perceived “lib” on the other side of the political fence was a Mormon? Would Democratic politician in question then be “evil?”

Anyway, this could get interesting. Let’s see how far a dying religious movement will take its attacks on a powerful media baron.