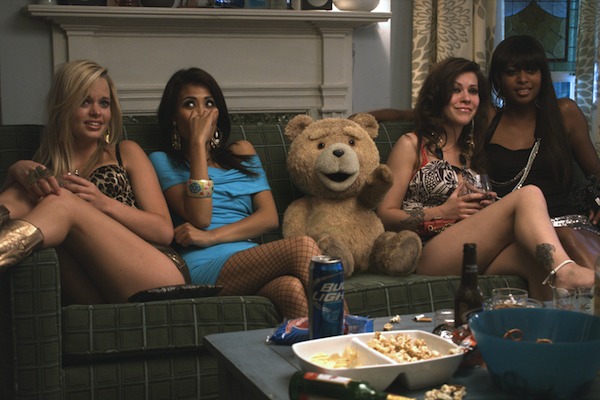 Channing Tatum’s stripping skills in Magic Mike were no match for the both magical and stomach-churning Ted.

Seth MacFarlane’s creation about what could be Teddy Ruxpin’s raunchy walking, talking uncle from hell waaaay outperformed the striptease dramatic comedy at the box office.

And it smashed box office records.

By comparison, the highly anticipated (among the ladies) Magic Mike pulled $39.2 million.

Up until now, the biggest money-making opening weekend for an R-rated, original comedy was 2009’s The Hangover — which raked in $45 million.

The Hollywood Reporter notes its preview business in Australia was unprecedented.

The flick starring Mark Wahlberg and Mila Kunis as Ted’s best buds made $4.5 million over the weekend.

Ted’s showing is particularly remarkable, given that audiences are supposed to get over the fact that a cute little teddy bear is making sexual gestures and tongue-wrestling with a busty broad many times throughout the movie.

Remarkably, even though Ted is little more than CGI and other technologies, viewers have seemingly embraced the human aspects of Ted the bear.

You find yourself cheering for him, you get annoyed with him — basically, he’s like your exasperating uncle or ne’er-do-well old friend.

MacFarlane has said in interviews that, because to make Ted just that “real” required the latest tech advancements, he wouldn’t have been able to do this movie a few years ago.

It appears that all that work and waiting has really paid off.

MacFarlane was on Twitter Sunday and had this to say to the crowds who bought a ticket to this norm-defying flick: “Thanks everyone for sending Ted thru the roof w/ record-breaking numbers. We busted our asses on this so we really appreciate the enthusiasm.”

Now, let’s see how far that enthusiasm will carry Ted and Co. After all, it is only the premiere weekend. And not everyone likes to fight the crowds. …