Since the time Katie Holmes married Tom Cruise, Scientology-watchers half-jokingly speculated about whether the actress could escape the clinches of the controversial religion. Now, there is intense speculation about Scientology’s role in the divorce, particularly the timing of their split, which coincides with daughter Suri’s sixth birthday, a notable age for church members. 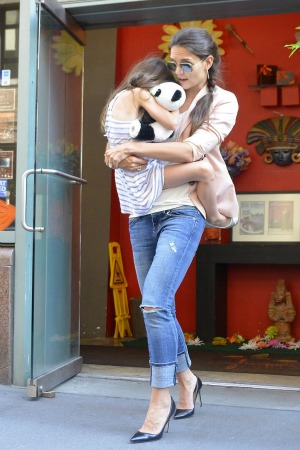 Of course, no one really knows “why” the celebrity couple split Friday, other than the celebrities themselves.

But that isn’t stopping bloggers and celeb-watchers alike from asking: “Why?”

And one reason behind the divorce that keeps rearing its head time and time again: Scientology.

But the site contends the 33-year-old actress hasn’t been seen inside a Scientology Church for “some time,” and that she even enrolled Suri in a Catholic preschool.

Suri could have been subjected to intense interrogation

Despite this, there is no way around the timing of the divorce for avid Scientology-watchers and ex-Scientologists.

After all, Suri turned six in April. That number really means something in Scientology circles.

That’s when children may be subjected to a form of interrogation called “security checking.”

Tony Ortega has been writing about Scientology for nearly two decades.

He’s developed a following among ex-members as well as diehards still in the church. The latter group both monitors his blog at the Village Voice, and used to weigh in a heck of a lot more frequently than in recent months about the virtues of the religion.

By way of Ortega, Scientology’s founder Hubbard introduced “sec checking” as a means of interrogation to weed out any “covert” threats within the organization.

The technique, in part, involves a seemingly never-ending list of questions children as young as six, Suri’s age, may be asked. Some of those questions may be found here by scrolling down a bit.

The questions range from strange (“Have you ever refused to eat just to worry someone?”) to downright spooky and dark for a grade-schooler (“Have you ever decided ‘Someday, when I’m grown up, I’ll get even’? If so, with whom?”)

Before you write this off as yet some more insight into the strange alien world of Scientology where there is, indeed, a creation story involving aliens, consider this: Many ex members contend that sec checking is yet another tool that has been used to turn children against parents, ripping families apart by getting the youngest members to rat on their own flesh and blood.

They contend Katie was freaking out over the prospect that her daughter may be recruited into the Sea Org — the highly regimented “division” of the religion.

Members as young as age 5 sign “a one-billion-year pledge to symbolize their eternal commitment to the religion and it is still signed by all members today,” according to the Scientology website.

It’s hard to imagine a celebrity daughter like Suri would be exposed to the type of long hours, low pay, and overall harsh conditions documented by Scientology-watchers like Ortega.

When you typically hear about the youngest members joining the Sea Org they were often born into Scientology, and know nothing other than the religion.

And these Sea Org members bow down to celebs like Cruise and family.

Regardless, there are two curious aspects surrounding the timing of the divorce.

Who knows? They just may show themselves during what’s poised to be one the biggest knock-down, drag-out celebrity divorce showdowns in recent times.