After seeing numerous other Spider-Man films and reading about the troubled Broadway musical Spider-Man: Turn Off the Dark, I thought the arachnid-spawned superhero was all played out… I was wrong. 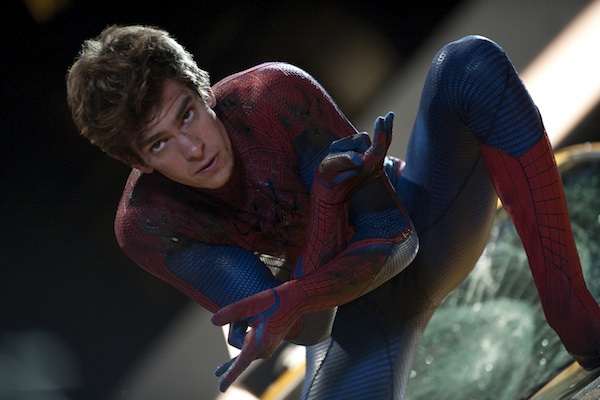 British actor Andrew Garfield (Never Let Me Go) plays Peter Parker as a vulnerable, emo teen, struggling with his identity due to the abandonment by his parents when he was only a boy. Luckily, he lives with his loving aunt and uncle played to perfection by Sally Field and Martin Sheen.

At school, he searches for the courage to stand up to the school bully while looking for any opportunity to make eye contact with pretty Gwen Stacy (Emma Stone). But when Peter finds a briefcase in his basement that once belonged to his mysterious father, he unlocks a curious mathematical equation and also finds a newspaper clipping with a photo of his father’s partner, Dr. Curt Connors (Rhys Ifans).

Ever curious about his parents’ disappearance, Peter goes to Dr. Connors lab to investigate. Once at Oscorp, he finds Gwen Stacy in a lab coat leading a tour group. Turns out she interns for Dr. Connors after school and provides for the perfect if not overly-convenient connection to set up her and Peter’s romance. 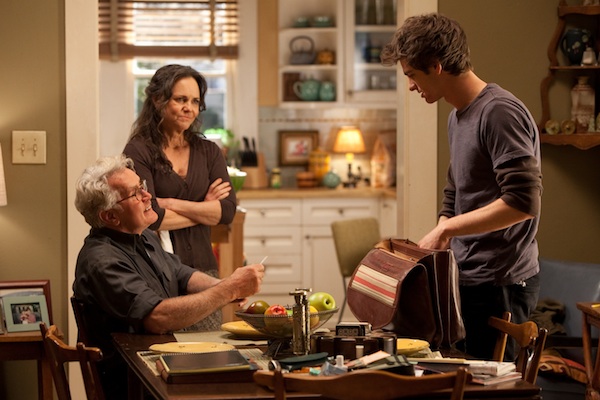 Peter befriends Dr. Connors and shares his father’s equation with him, unknowingly unleashing a terrible cross-species genetic experiment with dire consequences. Meanwhile, in a scene that is definitely an arachnophobe’s worst nightmare, Peter is bitten by a genetically altered spider whose DNA infiltrates his own, giving him silk-producing spinnerets and superhuman strength. Nice!

What’s most interesting about this version of Spider-Man is that Peter’s character steps away from the simpleton portrayed by Tobey Maguire and comes closer to a real high school kid with issues and problems made interesting by his big curiosity and even bigger heart. Andrew Garfield’s performance really grew on me through the film, as he layered the role with the loneliness of an outcast and the hormones of red-blooded teenage boy. Emma Stone is lovely with blonde hair and brings a sweet strength to brave, young Gwen. 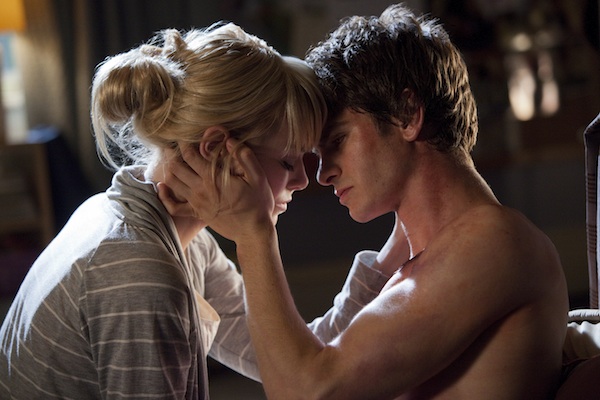 With superb special effects, this is the first film this year where the 3-D really adds an element of entertainment to the experience. I found myself ducking to avoid flying objects a couple of times and sitting on the edge of my seat when a child is stranded in a car that dangles by a mere strand of spider silk from the Brooklyn Bridge. Great work!

Bottom line: Though nearly 2 hours and 20 minutes, The Amazing Spiderman in 3-D manages to provide the ultimate superhero experience with a surprising amount of heart. Here is a summer movie both you and your man will love. Enjoy!