Think Blake Lively works hard to get that perfect figure of hers? Think again: The actress claims to never work out or eat right. Way to crush our dreams, Blake. 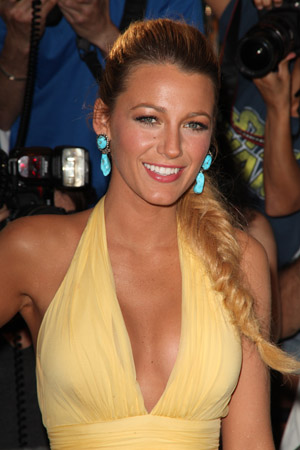 As if it wasn’t bad enough that Savages star Blake Lively is dating Ryan Reynolds. The blond Gossip Girl start told US Weekly earlier this week that she doesn’t do anything to maintain that droolworthy figure of hers.

“I eat cupcakes and I don’t work out!” Lively joked at a screening of her new film. “But if you ask me in 10 years, I’m going to regret answering that way now… I don’t even drink water. It’s terrible!”

Oh, lord. Her “I eat whatever I want!” has to be the new “I was so awkward and ugly in high school” thing that models like to pull. We’re not buying it, but whatever. Though, she loves to pull that “awkward” card, too.

One thing we do know for sure? Lively loves to bake — and she’s good at it, too.

“We were working a lot, but I still managed to bake an unbelievable amount of treats quite often and eat my way through New Orleans,” the actress joked to SheKnows last year while promoting Green Lantern with Reynolds. “You know you could spend your life trying to uncover all the treasures in New Orleans and not even scratch the surface. It’s such an amazing, amazing place.”

Do you think Blake Lively is naturally that gorgeous, or is she lying about not exercising?