When Angelina Jolie and brother James Haven shared an open-mouthed kiss at the Oscars many moons ago, they couldn’t quite get what all the hullabaloo was about. They claimed they were merely “close.” Led by mommy dearest matriarch Kris Jenner, here are a few newer celebrity families getting too “close” for our comfort. 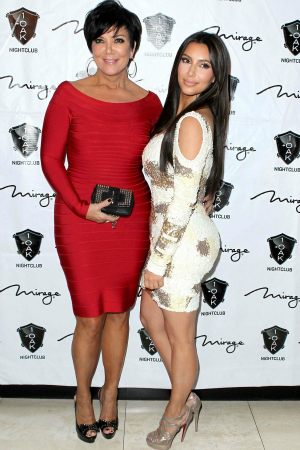 TV shows, book deals, leaked photos. Peddling your family for publicity is a slippery slope, and one that supposedly started with snuff for Kris Jenner. As if that weren’t shady enough, the sex tape in question is none other than the recorded tryst of daughter Kim and ex Ray J. Even ickier? Kris is being accused of “directing” the torrid on-camera action. Rumor has it she even shot retakes to ensure the content was pretty enough to pique public interest, and sources now say she is positively proud of the whole sordid affair. Ladies, there are some things a mother and daughter should not share… time between the sheets tops that list.

Talk about a daddy’s girl! Brooke Hogan has no qualms about getting personal with the Hulkster — and vice versa. When Brooke needed to be lotioned up during a sunbathing session, dear ol’ dad was on hand to help out… taking extra care to coat every crease of Brooke’s baking body. The mustached macho man also opted to ring in his 58th birthday at a PETA exhibit featuring oversized nude photos of his little girl. Most recently, Hogan made headlines for sharing the following fan tweet: “@HulkHogan Hey hulk I went ballsdeep on Brooke! Could I get a retweet!” If the touchy-feely daddy and daughter duo don’t tone things down, the Hulkster’s rep could be down for the count.

Yep, more creepy Kardashian closeness. This time, it’s the bond between sisters that baffles when, on an episode of Kourtney and Khloe Take Miami, Kourtney takes a home-waxing kit to her younger sister’s nether regions. We understand that Khloe didn’t want hubby Lamar Odom to see her down below looking like a wild woman of West Papua, but we’re pretty sure she could have found an on-call waxer outside of her immediate family. Don’t get me wrong — I love and trust my sister like no other. But if I ever ask her to trim my lady hedges, something is apocalyptically awry. Besides, since Kourtney totally blistered Khloe, it obviously pays to pay a professional.

Former minister Joe Simpson started creating controversy with weird comments almost as soon as Jessica’s star began to rise. In a now infamous quote, the disturbingly doting dad told GQ magazine of Jessica, “She’s got double D’s… you can’t cover those suckers up!” Eww. Dads should not make reference to their daughters’ bosoms. Ever. He also described Jessica as sexy, which — again — is not a word fathers should bestow upon their offspring. Beautiful? Yes. Cute? Sure. Pretty? Absolutely. But, sexy? That’s a no-go. I guess when you book your daughter for multiple Maxim features, though, sexy is a selling point.