It’s uncommon to find a dramatic story about the conflict between siblings, but in an interview with Chris Pine and Elizabeth Banks about their new film People Like Us, SheKnows finds out why it’s so important.

Two gorgeous actors. Los Angeles. A comedic plot. People Like Us has all the designs to be a fabulous romantic comedy. Unfortunately for all those lonely hearts out there, this film is about how to build a relationship between a brother and a sister who have never met before.

Chris Pine plays Sam, an egotistical broker living in New York, who finds out his father has died, but instead of leaving him a fat inheritance, the money is supposed to go to a woman he has never met. Enter Elizabeth Banks who plays Frankie, this mysterious woman who turns out to be Sam’s sister. The two strike up an uncanny friendship, and from there, we start to wonder if the passing of their father might be the best thing to happen to these two. 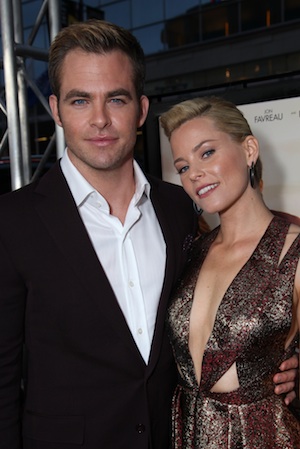 “We clearly have a connection,” Banks says. “But there’s an emotional journey and timeline in this movie. I don’t think that Frankie really opens her heart to what that could be.…”

Pine agrees that despite their differences, or any sexual attraction that might be underlying, the characters are able to grasp the values that so many of us overlook sometimes.

“(My character) has what is most important, which is family,” Pine says.

So, now that they’re experts on how to mend broken family relationships, during the filming of this emotional drama, did either of them discover anything new about how to cope with their own families in a more productive way?

Banks says she learned something that stuck with her after the filming. “You don’t get to choose your family, but you can choose to like your family.”

Michelle Pfeiffer co-stars in this poignant drama about finding out what family really means. People Like Us releases in theaters June 29.