Perk up, 24 fans! Kiefer Sutherland claims the feature-length version of the beloved television drama will happen. But there are a few more complications that need to be worked out. 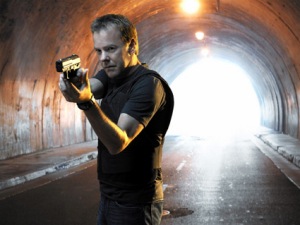 Long before 24 went off the air in 2010, fans of the intense television series were clamoring for a feature-length film. It wasn’t enough watching CTU agent Jack Bauer (Kiefer Sutherland) race the clock over the course of an entire season. Audiences wanted to see a big-screen Bauer beating terrorists in a shorter, two-hour time span.

Plans for a 24 movie have come and gone, though Sutherland has stayed consistent in claiming he’s itching to make the movie and return to the role that redefined his career. And so, it’s not so surprising to hear the actor say in a Yahoo interview that the movie’s still happening, and they are working out details.

“But now we have a good script,” he continued. “The film will pick up with Jack Bauer six months after the end of the final TV episode. The action will unfold in the course of a single 24-hour day. We still need to find a director and see which actors from the series would be available to return to do the film with me. The film is going to happen. I’m very anxious to get it done.”

That’s huge news. When last we saw Bauer, he had foiled yet another terrorist plot, this time in New York City. Rumors always suggested that a film would allow Bauer to go to an international location, circumventing the 24-hour limitations of the series. Now it sounds like the writers will continue to embrace that challenge.

As for whether fans have forgotten the show in its absence, Sutherland says, “I think audiences still remember the series and have a huge interest in seeing what a film version would be like. People still tell me how much they loved Jack Bauer and I think audiences appreciated that he wasn’t a typical hero-type and had many flaws and contradictions.”

So be patient, 24 fans. It’s going to take longer than you’d hoped, but Jack Bauer will be back on the beat sometime in the near future.