Stacy Keibler blew off some steam — and showed off her “girls” — at the Nintendo Wii U party earlier this week. Where was her sexy boyfriend? 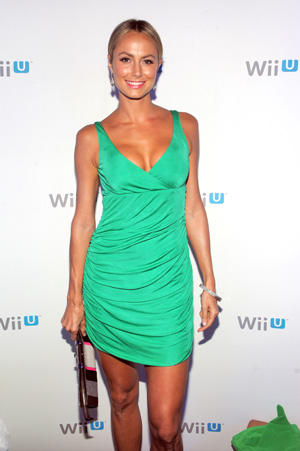 We sort of wondered if George Clooney had locked gal pal Stacy Keibler up in his Lake Como, Italy villa — we haven’t seen much of her since awards season. Boy, were we wrong! The former professional wrestler has apparently spent much of her time in the gym, judging from the tight-and-taut cleavage she showed off earlier this week at the Nintendo Wii U Preview Party in New York City.

Keibler, 32, joined other stars like Empire Girls’ Adrienne Bailon, Broadway star Constantine Maroulis and The Roots. No Clooney in sight, but it sounds like she had a really fun time.

“Stacy Keibler got into the Wii U spirit while playing Just Dance 4,” a partygoer told SheKnows. “She was loving all the different dance moves to choose from as puppet master. Stacy was enjoying her game so much Corbin Bleu asked to join along. As a professional singer and dancer, Corbin was right on beat hitting all the moves and having a blast!”

It’s not like Clooney has to be there for Keibler to have a good time, of course — she’s definitely a strong, capable woman. “She can do whatever she wants,” Clooney said earlier this year of his lady love. “I rarely tell anybody what they should be doing with their life.” 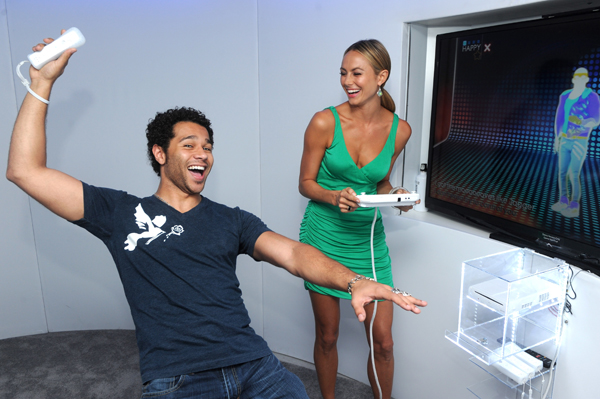 It sounds like their relationship is pretty strong — well, as strong as Clooney relationships can be, given his roving eye. Still, it sounds like Keibler isn’t too worried about their future… yet.

George Clooney better watch his back around Stacy Keibler >>

“I think just a good sense of humor. And polite… Someone who is genuine and honest and someone who likes to have a great time no matter what they’re doing… I was actually not really searching for a boyfriend. I don’t think about that,” the blonde bombshell said after the two got together last year. “I live in the present moment. That was my New Year’s resolution… and it’s worked out pretty good so far.”

Good way to look at it, Stacy!

Coming to stores this fall, Nintendo Wii U GamePad is a touch screen device that serves as both a Wii controller and TV remote.