Kelly Osbourne drunk on a plane? You’d better believe it. The star has confessed to being three sheets to the wind while miles high — but also explains why. 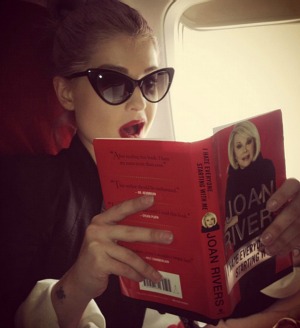 Kelly Osbourne hadn’t planned to get drunk on a plane headed to Atlanta last week, but an airport encounter with a stranger had the Fashion Police star all shook up and seeking alcoholic comfort.

In light of a fellow flier tattling to the press that Kelly Osbourne had been drunk during the flight, was crying, and had to be helped off the plane, the 27-year-old has decided to come clean.

Speaking to Radar Online she stated, “The first thing I want to say is the only reason I’m being so honest and telling you what happened is because I don’t think it’s fair for me to lie. I’m not going to say I didn’t do something when I did it.”

“I got drunk on the plane to Atlanta,” Kelly Osbourne continued. “It was on an empty stomach, and before I got on the plane a gentleman came up to me and asked me how my brother (Jack Osbourne) was doing and told me about his brother having MS (multiple sclerosis) and directed me towards a website.”

“On the plane I started looking at the website. It described how bad certain cases of MS got, and it made me lose it because I’ve sat through my mother having breast cancer, my dad almost dying from a bike accident, and now it’s my brother who’s my best friend.

“I lost it,” Kelly admitted.

Posting the photo above to Twitter, newly minted aunt Kelly Osbourne tweeted to fans that same day, “On the way to #Atlanta to work with @usherraymondIV foundation @ushersnewlook @joan_rivers makes the best inflight reading #pissingmyself”

Continuing to explain her actions, the previously rehabbed star continued, “The way I live my life after going to rehab is not the way that most people do. It isn’t. Yes, I still drink and I’ve always said that. I do have the occasional drink. I’m not using, I haven’t. I won’t. I’m not going to do that.”