David Beckham will still be involved with the Olympics, but not in the way the 37-year-old had hoped. 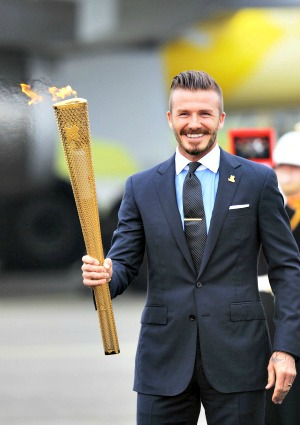 In a shocking turnabout, Agence France-Presse reported on Thursday morning that David Beckham was not selected to play for Team Great Britain during the Olympics.

The news is particularly hard for the 37-year-old, as the Olympics is being hosted on his “home turf” in London this year.

“Everyone knows how much playing for my country has always meant to me,” Beckham said, following the announcement. “So I would have been honored to be part of this unique Team GB squad.

“Naturally I am very disappointed, but there will be no bigger supporter of the team than me. And like everyone, I will be hoping they can win the gold.”

Though Beckham is fast approaching 40, he was considered a “shoo-in” after making the team’s 35-man prelim squad cut last month.

This “you are not it” moment was brought to us by Coach Stuart Pearce. He axed the starf for the final, 18-man squad.

Pearce had traveled across the pond to assess Beckham’s form for the L.A. Galaxy last week… and he didn’t like what he saw, apparently.

In recent years, Beckham has been known more on a global level as “Mr. Posh Spice,” courtesy of both his celebrity and his looks. His role, or perception, as “athlete” has no doubt been diminished.

And that celeb status itself had generated controversy, with AFP reporting that critics felt his participation in the London Olympics would “devalue” the soccer tournament.

Yet, Beckham spoke over and over gain about his desire to compete at the Olympics in his home city.

And, it was thought by some, that the former Real Madrid standout would be “rewarded” with a place on the squad — thanks to his role in persuading the 2005 Olympic Committee to bring the Games to the big “L.”

One thing no one will be taking away from Beckham is his role as “ambassador.”

He carried the torch in May as it arrived in the U.K. and lit the first cauldron, indicating the symbolic start of the Games.

And before you shout, “Age-ism!” consider this: AFP reports there are three “over-age” players who were selected by Coach Pearce, including former Manchester United teammate Ryan Giggs.