Exclusive backstage interviews with the queen of blue hair show a real, sensitive, and very determined young woman, Katy Perry. Behind all that pop glitz, we find a girl with a dream in the new rock documentary, Katy Perry: Part of Me.

Singer and pop icon Katy Perry debuts in her first feature film as… herself. SheKnows brings you this online exclusive look behind-the-scenes as she travels the world in the new rock documentary, Katy Perry: Part of Me.

The film tracks the singer’s musical explosion into pop culture stardom, but this electric story with amazing concert sequences and sold our performances isn’t about only the music. 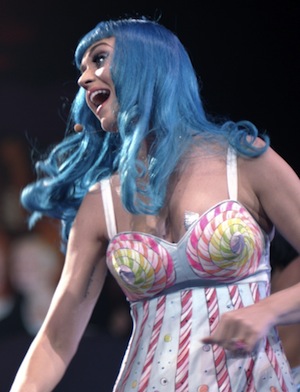 It’s about the fans, the glam, and the insurmountable pressure of being the 27-year-old musical sensation, Katy Perry. Personal life is definitely on the table. Through the shooting of the documentary, our blue-haired diva went through a painful separation from her rocker husband, Russell Brand.

Katy Perry opens up about her divorce and record label >>

The cameras were there to catch every minute. In this exclusive clip, audiences get to see a rare glimpse of the outgoing artist backstage.

Katy Perry gets naked at Much Music Awards… or not >>

The clip begins with a look at young Perry, her father telling her to tell the camera, “I’m gonna win the book reading contest.” She’s embarrassed, but not so much that we don’t know she will win. She must. She’s unstoppable Katy Perry.

At least that’s what this documentary tells us. “There’s a lot of ups and downs,” one interviewee tells the audience. Perry didn’t always have it easy. She became famous so fast and so hugely, she struggles to stay true to herself. She must also deal with pressure from family, the music industry and her fans.

What can we learn from seeing Katy Perry grow up in the spotlight? Being famous is no cupcake. But having dreams is worth all the money in the world.

Katy Perry: Part of Me rocks into theaters July 5, but audiences who live in select cities throughout the United States and Canada can catch a sneak peek of the film on July 2. Pink sunglasses and posters accompany the show. Who could ask for anything more?