Lourdes wearing Madonna’s cone bra? Set your eyes on the photo yourself! The 15-year-old daughter of the singer modeled one of her mother’s most infamous looks for the Twitterverse — and then the photo went missing. 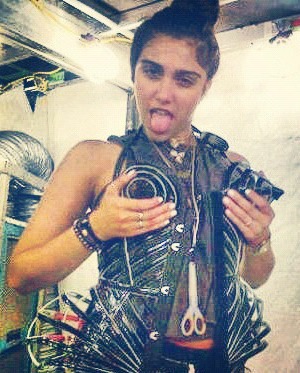 When Madonna’s away, Lourdes will play — with her cone bra! The firstborn child of the singer posed in her mother’s infamous geometric brazier, sticking her tongue out in a photo that feels a little too provocative for a 15-year-old.

The photo of Lourdes in Madonna‘s cone bra was shared via the @MaterialGirl Twitter handle, which represents the teen and singer’s clothing line. Interestingly, the image was up for only a short time before being taken down.

The URL address of Lourdes’ risque photo currently redirects to a Twitter page that explains, “Sorry, that page does not exist!” Perhaps someone got in a little hot water for playing dress up in her mother’s sexy clothes?

Yet, out of anyone, Lourdes should know full well that pictures don’t just go away. The underage fashion designer was recently caught smoking a cigarette by paparazzi cameras.

“[I] wasn’t very happy,” Madonna said in reaction to the photos of Lourdes smoking. “But cigarette smoking I’m not very fond of for anyone. I don’t approve of anyone smoking cigarettes — most of all my daughter.”

Madonna’s nip slip isn’t a slip at all >>

The snap judgment of the Twitter jury at large seems to be disapproving of Lourdes’ cone bra photo. “Pathetic,” one user wrote Wednesday evening, while another commented, “W8 til she starts posing sans clothing.”