While the numbers are slightly below projections, you can be sure Justin Bieber is not upset by the first-week album sales of his first grown-up album. 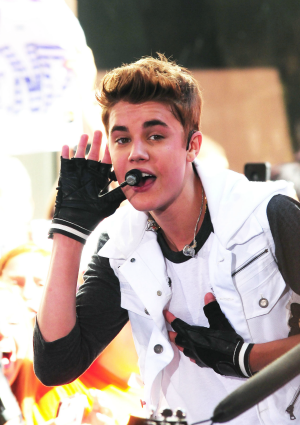 What were you doing when you turned 18? Thinking about graduating high school? Going to college? Selling millions of albums?

Justin Bieber, who turned 18 last March, just sold 374,000 albums in the last eight days. His new album, Believe, was released Tuesday June 19 and is already almost 100,000 copies ahead of the first week sales of his last release, in 2010.

“Considering the difficult climate for album sales, Bieber’s mark ‘is a very robust number,’” says Keith Caulfield, Billboard‘s associate director of charts, according to USA Today. “That Bieber can have the biggest opening week of the year says that he’s doing a good job. It’s always tough making that transition from tweeny-teeny pop star to young adult. It’s a challenge, and he seems to be doing quite well so far.”

Considering most of his fans are under the age of 18, these album sales may seem harder to come by. But Bieber makes it look easy.

“I’d venture to guess that the single “Boyfriend” has gained him fans he didn’t have previously,” Caulfield says. “It’s more mature. It’s been embraced by radio stations, while none of his previous singles have been, and that’s helping him find a wider audience that’s a bit older.

However, Bieber does not have the record for one-week sales. According to USA Today, Adele sold 730,000 copies of her album 21 the week after she won on the Grammies.

His nationwide tour to support the album will kick off in September.