One of our favorite books of last year was Deborah Harkness’ debut novel, A Discovery of Witches, which we introduced here as a must read when it came out in paperback in January. The only thing we didn’t love about A Discovery of Witches was having to wait to find out what happened next, but luckily we now have the second book in the trilogy: Shadow of Night. 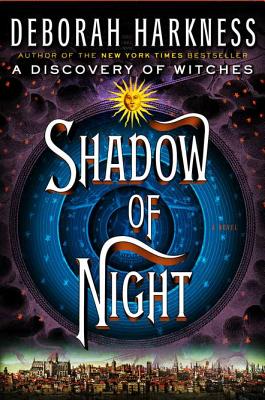 Deborah Harkness’ debut novel, A Discovery of Witches, thrilled readers right up until the cliffhanger ending. In Shadow of Night, the second book in the trilogy, Harkness picks up in the lives of her main characters — scholar-witch Diana Bishop and geneticist-vampire Matthew Clairmont — precisely where we left them in A Discovery of Witches. In an effort to find witches who are able to help Diana learn to control her powers (a must if she, Matthew, their love and their loved ones are going to survive), Diana and Matthew must travel into the past — specifically, into Matthew’s past in Elizabethan London.

For a student of alchemical history such as Diana, Matthew’s past is a fascinating place, particularly once she learns of his association with the infamous School of Night, a group of men including Sir Walter Raleigh, Christopher Marlowe and others who studied science and philosophy, including alchemy. Perhaps even more interesting than meeting Raleigh, Marlowe and the rest of the School of Night, though, is the opportunity for Diana to meet Matthew’s father, a vampire who has already been killed in Diana’s own time. As with his mother, Diana’s relationship with Matthew’s father gets off to a rough start, but before long she is extremely grateful for the chance to have met him.

Traveling to the past is not all fun and games, however. Diana must be ever-vigilant in her attempts to blend in with a world four centuries removed from the one she is familiar with. In the late 16th century, Diana doesn’t know how to dress or how to speak, and there is a very real threat that she will be denounced as — irony of ironies — a witch and burned at the stake.

Fans of A Discovery of Witches will be thrilled with this latest offering from Deborah Harkness. Often the second book in a trilogy serves more as a connection between the first and last books than as something that advances the story in its own right. Such is not the case with Shadow of Night. Instead, readers are thrown straight back into the drama of Diana and Matthew’s lives as they try to ensure a future for themselves in a way that will both thrill and delight.