Two days of Vegas auditions have aired, and the competition is sizzling like a slab of bacon on the Vegas strip. The contestants gambled big — some won the jackpot, others crapped out. Here a few highlights from this adrenaline-charged Vegas sideshow… 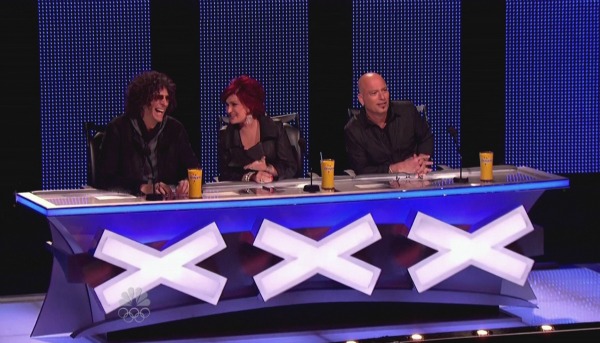 The chemistry between Howard Stern, Howie Mandel and Sharon Osbourne is more magical than Eric Dittleman’s mind reading. They dress like superheroes, usually in black (although why wardrobe still has Howard in three sweatshirts in the Vegas heat is puzzling), and don’t think we didn’t get swept up in the judges’ overly dramatic slow-mo approach to the AGT crowd the first day. Which leads to our next point…

The editing of this program makes it predecessors, like American Idol, look like an episode of Barney the Dinosaur. Thanks to the mad skills of the editing team, the show is dramatic and engaging, but without being lame. When Spenser Horsman dropped the pick to his lock with 10 seconds left to escape a water tank and then the show cut to a commercial we nearly fainted! We about burned up the fast-forward button on our DVR remote. We’re sure Spenser did that on purpose as part of the act, but who cares? On a final editing note, may we issue a big, fat thank-you to the editing team for editing much of the dance routines? How do they know we don’t really want to sit through most of those? Sheer brilliance.

It was absolute agony to watch our favorites crack under pressure. Our hearts are going to be broken for at least four more days over our darling Goth Marilyn Manson wannabe, Andrew DeLeon, who nose-dived like an air show exhibition tragedy. So hard to watch. We love you Andrew! And let’s talk about Mary Joyner, Flo Jo’s daughter, who didn’t quite have enough stuff to cross the finish line. Never a more vivid example of the agony of defeat. Simply Sergio, the opera singer, simply b-o-m-b-e-d when he hummed through his performance (he said due to his cold, Howard said due to the fact that he spaced the lyrics). With these acts, what happened in Vegas is not going to stay in Vegas. They’re going home.

Olivia and Eric, the duo from the University of Texas, knocked it out of the f’n park again. Can we just give these two the cool million and call it a day? And can they just shut Howard up and become a couple already? He’s not going to rest until those two make music of a different kind together! All Beef Patty eked his/her way through. Maybe eked isn’t the right word. Plowed his/her way through. And Tim Poe, who may or may not have served in Afghanistan, and who may or may not have been injured in the line of duty, and who may or may not have showed producers a picture of himself in uniform which really wasn’t him, went home. Let this be a lesson to contestants who want to improve their odds with a sob story. It helps if the story is true, and at a minimum if you’re going to fabricate a story, double-check your substantiating “evidence.” Tim Poe proved to be an amateur singer and storyteller.

Are we the only ones who think it’s oddly funny that the producers put “student” under the names of 6- and 10-year-olds? When little Isaac Brown steps on stage, is it really necessary to put “student” under his name? We can see that he’s a kid, and thusly we assume his name is not going to be “Isaac Brown, Real Estate Agent” or “Isaac Brown, Bartender.” The dance group, Funk Beyond Control, funked up and got sent home. Is there anything sadder than seeing people in cat suits reduced to tears?

But that’s just our opinion. What’s yours? Are you an AGT junkie? Who do you want to go home? Who do you predict will win? Who would you like to see get a second chance? Tonight is the standbys’ turn, and we thought the pressure was intense before!