Hide your money! Hide your mistresses! Richard Gere’s Robert Miller is on the loose. The silver fox stars in the first trailer for the financial drama Arbitrage, which has him playing a slimy husband with a double life. 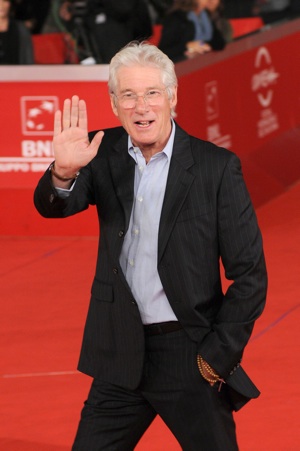 Richard Gere is in a whole heap of trouble. The Oscar-nominated actor headlines the upcoming drama Arbitrage, which tells a very familiar story. He plays a Bernie Madoff type who’s at the center of a financial scandal.

Gere’s Robert Miller, an extremely successful (and rich) hedge fund raiser, is not as perfect as he seems. He’s at the top of his game when his shady extracurricular activities come to light. The first trailer for Arbitrage unveils two sides of his murky character.

Robert makes a grave mistake that forces him to go to an unlikely ally for help. From there, his problems snowball to the point of no return. Money starts to disappear and everyone begins to doubt his legitimacy. Does that sound familiar?

The look and feel of Arbitrage reminds us of last year’s Margin Call. It was another financial drama that delved into corruption and showed how far men are willing to go to keep their pockets lined.

Gere seems to be giving his all in this performance. Could another Academy Award nomination be in his future? He receives great support from the film’s cast, which includes on-screen wife Susan Sarandon and indie darling Brit Marling.

Check out the trailer for Arbitrage below:

Arbitrage is directed by Nicholas Jarecki and made its world premiere Jan. 21 at the Sundance Film Festival. It’ll appear in general theaters Sept. 14.

What do you think of Gere in Arbitrage?