Kris Jenner’s alleged words to a close family friend don’t seem to match what she told Oprah recently — that the sex tape was an unwelcome and painful surprise. In fact, an insider says Jenner’s “proud” of it. 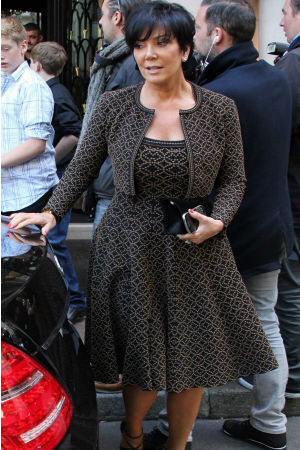 Maybe Mama Kris Jenner’s alleged pride in the sex tape that made daughter Kim Kardashian a household name is due to the “production” being her idea all along.

HollywoodLife.com says they can confirm Jenner was behind the infamous tape featuring Ray J and KK. But the real kicker?

They say, by way of a source close to the Kardashian’s, that mama is proud of the tape!

The family “friend” had this scathing condemnation of Kris: “When news broke that Kris helped Kim make her famous sex tape, Kris could care less. For Kris, publicity is publicity, whether it’s good or bad.”

The “news” said source speaks of comes courtesy of Kim’s husband for a minute, Kris Humphries, who recently claimed that the Kardashian/Jenner matriarch not only thought of the idea for the sex tape but she directed it. As in, she requested the masterpiece be shot over again because it allegedly wasn’t “pretty enough” the first go-around. Icky.

This is in contrast to what mama Kris has divulged to Oprah, who’s been doing a lot of cross-promotion with the Kardashians recently.

In fact, Us Magazine is reporting Wednesday morning that O will be appearing on the family’s reality TV program.

Long story short, Kris essentially told O what any mom should say in such a situation: The sex tape was something she didn’t want to hear about, that she hated to see her daughter in pain over it, yada yada.

But no mother in her right mind would fess up to something so gross: That she not only directed the snuff, but that she was proud of her directorial debut.

Then again, no mother in her right mind would probably be accused of such a thing — and have so many people ’round the globe actually believe she was capable of pimping out her flesh and blood in this way.