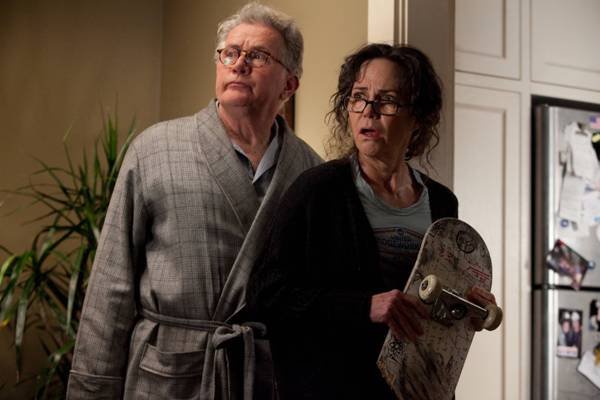 So you might be surprised to hear that the 65-year-old is bristling at the thought of watching herself in the big screen 3D flick this summer.

“I’ve reached an age where it’s hard to look at yourself,” Sally told reporters. “I might not even see the movie, don’t tell anyone out there. It’s a very selfish reason. It’s 3D for god’s sake! It’s such a small, vain little thing, but it’s true. I don’t like watching myself at all, I never have.”

Well, we think she looks fabulous after more than five decades in the business. Her co-star, Martin Sheen, seemed to agree as well, telling Field, “I like to watch you.”

Sally and Martin play Peter Parker’s famous Aunt May and Uncle Ben in the film, and have some pretty emotional scenes with Andrew Garfield. The two seasoned performers said it was joy to work with the blossoming actor, and raved about his talent.

“This young man, and Sally would agree, is a very, very special guy,” Martin said. “Watching him work was so gratifying. He was so generous with us, because he had to do some heavy emotional work and the set was on fire when he went to those places. We just all really enjoyed each other’s company.”

It is those home scenes with Garfield, Field and Sheen that really add the human angle to the typically action-packed series. But these weren’t your typical scenes in a drama. Field explained how difficult it was to film with massive 3D cameras in her face.

“What was bizarre for me, because I’ve been doing this for so long, that this little kitchen scene was filmed with a hand-held 3D camera, which means it is enormous and it is being held up on a bungee cord by guys up above,” Field said. “There was a little part of me saying, ‘Get it as far away from my face. I will never see this movie for as long as I live.’ It is kind of amazing, not losing your focus when we’re really maneuvering around this huge piece of equipment.”

Well, we think Sally, Andrew and Martin did an amazing job, and we’re guessing she’ll agree when she eventually sees it!

Catch them in The Amazing Spider-Man, in theaters July 4th.