The Amazing Spider-Man’s Andrew Garfield talks about taking over the iconic role. From flying through the air to kissing Emma Stone, meet the new man behind the web. 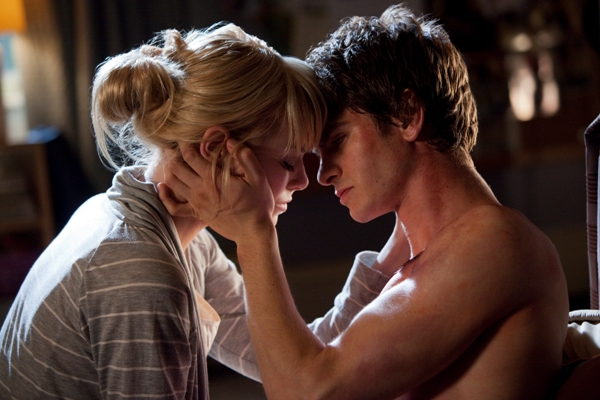 You would think that battling sci-fi monsters and soaring through the sky hooked up to swinging rings would be the most difficult part of playing a superhero. But according to Andrew Garfield, kissing a cute girl on camera was the scariest part of his role in The Amazing Spider-Man.

“I actually felt more safe when I was swinging around because you have a very strong safe pair of hands holding you up,” Garfield recently told reporters at the Spider-Man press conference in NYC. “The romantic scenes are free falling you know, as they should be. They have to be spontaneous, and free and terrifying because that’s what first love is.”

Perhaps it was because Garfield’s emotions weren’t purely for the film. The actor and his on-screen love, Emma Stone, began dating shortly after meeting on set. Stone plays the smart, blond Gwen Stacy that Peter Parker crushes on.

“First love is the scariest thing you’ll ever go through and the most exhilarating, you’ve got so much to lose,” Garfield said. “And it’s Emma, and she’s terrifying.”

Stone and Garfield capture that chemistry of young love perfectly though, as well as the range of emotions of a teenager, coming of age.

“I could always identify with Peter,” Garfield said. “He went through the same stuff that I went through, that’s why I love him so much because I felt like I was him and that’s why everyone feels like he’s him because he’s all of us.”

Garfield says he dealt with a lot of the same issues about being the “skinny guy” that Spider-Man, a.k.a. Peter Parker does in the film.

“I felt growing up, I felt like an underdog,” Garfield said. “I was a skinny kid. I always thought I should be bigger for some reason, because society tells you that. So that was something I could always identify with Peter… there is nothing better than to see a skinny guy beat the crap out of big guys. Now I’ve just realized being skinny is OK.”

And with a multimillion-dollar blockbuster and one of the hottest actresses in Hollywood on his arm, we agree!