From cruise ship stewards to litigious lawyers, a diverse group of plaintiffs has stepped forward this week to seek punitive damages from allegedly law-breaking celebs. Check out these big cases on the court docket! 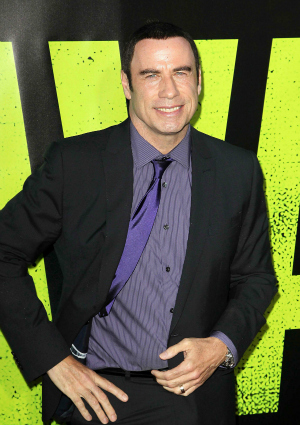 John Travolta. According to the most recent suit filed against him, John Travolta (Mr. Saturday Night Fever) has a much different definition of room service than the Average Joe. A former Royal Caribbean cruise ship steward claims that, in 2009, he simply tried to drop dinner off in the actor’s stateroom when Travolta propositioned him for a neck rub. The steward obliged (food sanitation laws are merely suggestions, right?), at which point Travolta’s “wild hog” purportedly made a cameo. And, well, it gets much seedier from there. If true, it looks like Hollywood’s lord of the dance clearly didn’t realize that the steward’s hot cross buns weren’t on the dessert menu.

Kim Kardashian. Yeah, yeah, there’s that whole divorce drama lawsuit thing going on. Enough of that! Let’s move on to the more entertaining topic at hand… the new lawsuit alleging Kim and current squeeze Kanye West are full-on Al-Qaeda terrorists. Nope, not a joke. Well, not to Jonathan Lee Riches, who filed the seemingly absurd suit. Riches, who holds the Guinness World Records title for “World’s Most Litigious Man,” says he saw Kimye throwing a concert for the infamous terrorist network while he was deep in the West Virginia woods. Ah, yes, who doesn’t enjoy a deep-woods WV stroll from time to time? Perfect for wildlife-watching or, apparently, hallucinating elaborate hoaxes.

Kelsey Grammer. Most famous for his role as a psychiatrist in the classic TV sitcoms Cheers and Frasier, Kelsey Grammer is once again messing with people’s heads — in the worst possible way, according to a suit filed by former friend Lydia Cornell. In the suit, she accuses Grammer of getting her involved in a Ponzi scheme via the “social media” site Staropoly.com. Sure, the site used Grammer’s likeness to entice unsuspecting celebs to join the shady venture, and it would appear Grammer’s camp made little effort to stop the swindling (although Grammer claims he, too, lost money in the scam). But, hey, as we all know by now, you are innocent until proven guilty in Hollywood… and then sometimes you are still innocent.

Courtney Love. There certainly isn’t any love lost between the former Hole frontwoman and — well, everyone. Hollywood’s original hot mess has been hit with suits by fashion designers, former business partners, credit card companies, and business managers. The latest to join the list is famously ferocious attorney Keith Fink, whom Love had retained at the steep rate of $595 per hour (plus fees, naturally). Fink claims that, even when he helped Love handle case after case against her for nonpayment of services, he never suspected the grungy, er, grunge rock singer wouldn’t cough up the change for his charges. Um, did you meet her before taking her case?