Emma Stone plays the pretty blond love interest to Andrew Garfield’s Peter Parker in this summer’s revamp of the classic, The Amazing Spider-Man. But unlike her bombshell character, Stone says she’s a lot more down to earth. 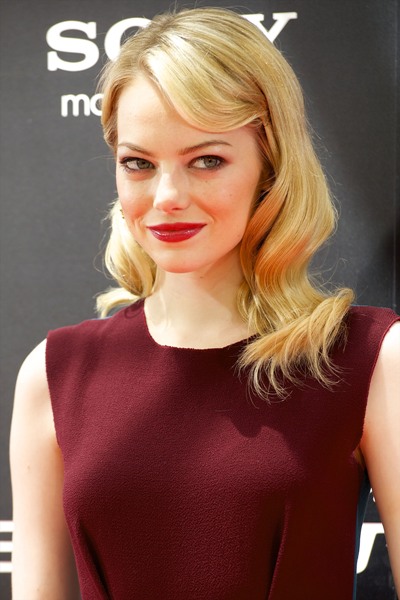 We may idolize her, but Emma Stone insists she’s just an average gal.

“I’m by no means a supermodel or an unobtainable-looking person,” Emma recently told reporters at the press conference for The Amazing Spider-Man. “I’m a lot more (girl) next door.”

Stone was emphasizing the differences between herself and the sultry comic book vixen, Gwen Stacy, that she plays in this summer’s Spidey flick.

“Obviously, I’m a lot less voluptuous than Gwen unfortunately,” said Emma, looking thin in a chic black leather top and white skinny jeans. “We worked to make sure that Gwen felt like Gwen, but also made sense in the real world.”

Her real-life beau and co-star Andrew Garfield clearly prefers her toned down look. The two have been dating since meeting on set last year.

“I met Andrew at the audition got to act with him for the first time, and he is one of the best actors I have ever worked with,” Stone said. “I instantly knew how much I could learn from him and that really drew me in.”

But don’t ask for any specifics on their relationship. Emma is characteristically tight-lipped.

When asked to describe the chemistry between the two, Stone responded, “Can one explain chemistry? It just clicks. It really isn’t definable; it really is exactly what they call it.”

Well, whatever it is, it comes through on and off screen! And with Emma’s electric personality, it’s easy to see why.

The actress shared many compelling stories with the crowd including an account of her battle with acne as a child, her love of science, and why she hates the word “smart.”

“I don’t like the word ‘smart’ anymore because what does smart mean?” Emma asked. “Does it mean you are able to learn or that you graduated college? I didn’t graduate college, but that doesn’t mean I’m not smart.”

Emma has a healthy appetite for knowledge sharing that she got very into science while looking for a cure for her skin troubles.

“I had really bad acne, a couple years ago,” Stone said. “So I was online trying to figure out what causes this kind of thing. (My aunt and uncle) took us to these labs… and I was fascinated. I was learning about regeneration and looking at stem cells. I was like, ‘What do I need to do to intern?’ And you had to be a college graduate.”

That hasn’t stopped Stone though. She shared her hopes to begin online science classes soon in between her rigorous filming schedule.

Be sure to catch Emma Stone as Gwen Stacy in The Amazing Spider-Man, in theaters July 4th.